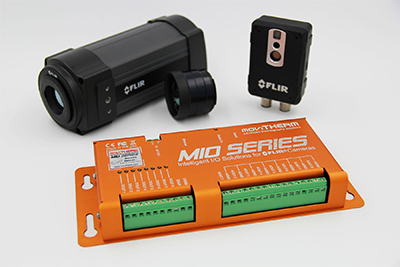 The MIO I/O module provides connected FLIR® cameras with the ability to alarm if a configured temperature threshold is being breached. The MoviTHERM MIO I/O module automatically connects to any of the configured FLIR® cameras on the network, looks up the designated region or area of interest (ROI) and starts monitoring. The MIO can also output an analog 4 to 20mA current loop signal per each region of interest, thus providing the user with process control options. The alarm outputs as well as the current loop outputs are being updated in real-time in this embedded monitoring solution.

An intuitive web server interface provides the user with a quick and easy way to configure or change alarm thresholds.

MoviTHERM’s MIO I/O Module eliminates the need for running monitoring software on a PC. It g 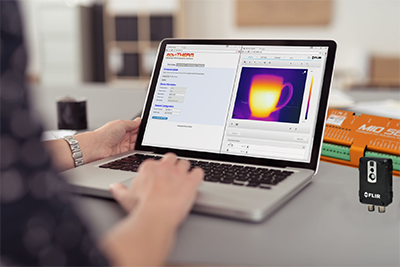 reatly simplifies the architecture and infrastructure that is typically required for a multi-camera monitoring system. A remote monitoring system based on the MoviTHERM MIO I/O module is easily scalable without adding significant cost or complexity. Each MIO supports up to seven cameras. To monitor more cameras or to extend the I/O, simply add more MIO I/O modules.

Utilizing the MoviTHERM MIO I/O module for a remote monitoring applications completely removes the complexities associated with thermal imaging and software engineering. The user can finally focus on what is important without the learning curve, programming or hiring an engineering company. 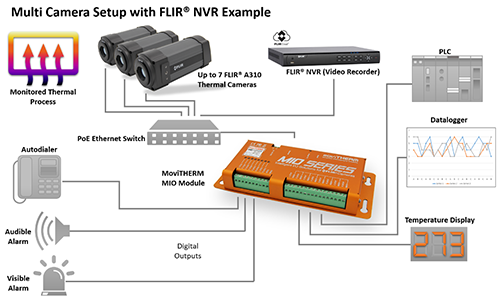 About FLIR
FLIR Systems, Inc. is the world's largest commercial company specializing in the design and production of thermal imaging cameras, components and imaging sensors. Based in Wilsonville, Oregon, United States, and founded in 1978.

MoviTHERM to Exhibit and Present at Inframation 2016 in Las Vegas, NV

How to Build a Thermal Camera Monitoring System with Alarm