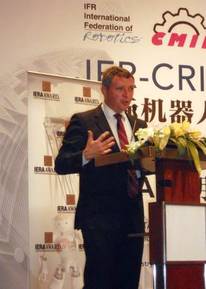 The 10th annual Invention and Entrepreneurship Award in Robotics and Automation (IERA) was presented to Dr. Guy Caverot, BA SYSTEMES for a mobile base designed to receive an X-ray machine. The session was held at the conference of the China International Robot Show (CIROS) in Shanghai, China.

"The awards committee honoured BA SYSTEMES because of the transfer and commercialization of industry knowledge to medical systems and for meeting the strict certification standards", commented Raj Madhavan, Vice President of IEEE-RAS Industrial Activities Board and Chairman of the Awards Committee.

"I am very happy to receive this award because it rewards all the employees of BA SYSTEMES for their excellent work. I thank the jury who acknowledged the importance of innovation management to lead such entrepreneurial project that challenges people and technology. The prestigious IERA Award is a great honour for our company which seeks the implementation of robotic systems not only in factories and workshops but also in the medical field to ease the life of individuals whatever their activity is." stated Dr. Guy Caverot, BA SYSTEMES.

A robot in a surgery room is an enormous challenge
BA SYSTEMES had created a mobile base designed to receive an X-ray machine. The innovation remains in a robot with movement control, a navigation system with proximity detection, omnidirectional displacement, and an X-ray picture chain on a 3-5 axis gantry. The system guides various cardiovascular and oncology procedures through 3D imaging. This project represents a major technological breakthrough in the health field in providing innovative, flexible and secure solution in the highly demanding environment of hybrid surgery rooms.

This newest image guided system for surgery allows: 3D imagery and by sections. The sterility widely increased. The robot is perfectly integrated with surgical equipment and it is a safe and reliable device. The automated mobile system enables to park it when it is not used. The surgeon's requirement to access the patient is respected. Moreover, the surgical intervention can be evaluated in real time. The BA SYSTEMES laser guidance system implemented on the machine has a millimetric accuracy.

BA Systems is specialized in AGVs
European leader in intralogistics, BA SYSTEMES offers solutions for industries for 35 years. The robust installations are composed of Automated Guided Vehicles (AGV) and their supervision software developed in-house. The company implements the open innovation model since 2007 to spread innovation and maximizing its potential. Thanks to this method, BA SYSTEMES can design products always more innovative. The know-how in mechatronics and mobile robotics of the company added to the skills of its academic partners enable to answer new needs of end-users.

The other two nominated finalists were: 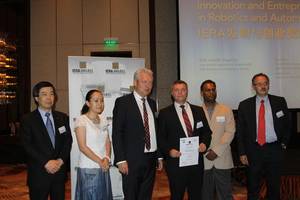 In 2005 the IEEE Robotics and Automation Society (IEEE/RAS) and the International Federation of Robotics (IFR) agreed to jointly sponsor the Invention and Entrepreneurship Award. The purpose of this award is to highlight and honor the achievements of the inventors with value creating ideas and entrepreneurs who propel those ideas into world-class products. At the same time the joint disposition of the award underlines the determination of both organizations to promote stronger collaboration between robotics science and robotics industry. The annual presented award consists of a plaque and a $2,000 honorarium.

ABB survey finds 70% of US businesses looking to bring pro-duction closer to home, robotic automation and workforce up-skilling essential to return of operations