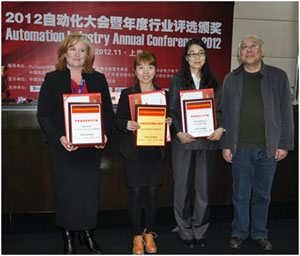 Microscan, a global leader in technology for precision data acquisition and control solutions, announces that its QX-870 industrial laser barcode scanner has won the 2012 Most Popular Product Award in the automation industry.  Microscan Marketing Manager, Hui Fan, accepted the award during a ceremony at the Industrial Automation Show (IAS) in Shanghai, China.  The awards and ceremony were co-organized by the Chinese Automation Association, China Automation Media Group, and China International Industry Fair. The award commends technical innovation and market influence in the automation industry; it is decided by a strict online voting process that is overseen by an independent panel of judges.

The QX-870 laser scanner was a top candidate for the 2012 Most Popular Product Award because of its wide implementation by the Chinese SFDA (State Food and Drug Administration) for regulation and data tracking using newly-mandated barcode printing on pharmaceutical packaging.  Currently, thousands of Microscan barcode readers are operating in more than 2,000 pharmaceutical factories in China, many using the QX-870. The scanner’s popularity stems from its innovative flexibility, incorporating the latest technologies in barcode reading and connectivity in an easy-to-use solution for barcode track, trace, and control applications.  Simple to set up and deploy, the QX-870 features a programmable sweeping raster to read multiple codes, in varying locations, even if they are damaged or misaligned.  With its plug-and-play setup and the most aggressive decode algorithms available, the QX-870 is the ideal scanner for any industrial application.

The QX-870’s decoding capabilities allow reliable reading of barcodes as far as 30” (762 cm), at up to a 10” (25.4 cm) beam width.  In addition to sweep angle and speed controls, the QX-870 features a programmable raster with intelligent auto framing technology.  Advanced software will automatically frame the raster height and width of the laser to match the barcode, allowing selective targeting of codes within a single read cycle.

The QX-870 has won several Chinese automation awards, including the 2011 Best Market Share Cup for the China FDA Project as well as the 2011 Most Popular Product for the auto ID industry.

For more information about Microscan and the QX-870 barcode scanner, visit: www.microscan.com.

About Microscan
Microscan is a global leader in technology for precision data acquisition and control solutions serving a wide range of automation and OEM applications.  Founded in 1982, Microscan has a strong history of technology innovation that includes the invention of the first laser diode barcode scanner and the 2D symbology, Data Matrix.  Today, Microscan remains a technology leader in automatic identification and machine vision with extensive solutions for ID tracking, traceability and inspection ranging from basic barcode reading up to complex machine vision inspection, identification and measurement.

As an ISO 9001:2008 certified company recognized for quality leadership in the U.S., Microscan is known and trusted by customers worldwide as a provider of quality, high precision products.  Microscan is a Spectris company.