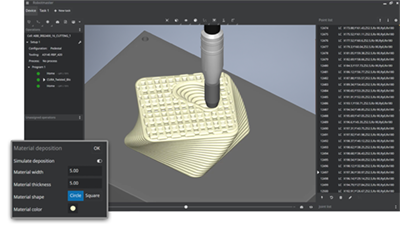 “The many new features found in V7.3 are based on close work with many of our current customers to understand how we can further streamline offline robotic programming,” explains Garen Cakmak, leader of Hypertherm’s Robotic Software Team. “By adding support for more software types, files, and robots, we are helping customers solve sometimes complex challenges quickly and easily.”

Building upon the completely redesigned V7 architecture, first introduced in 2018, Robotmaster uses integrated CAD/CAM functionality to make robotic programming easy and intuitive for everyone, even first-time users. It is used by a wide range of industries to program robots for tasks that include surfacing, 3D milling, additive manufacturing, welding, painting, and more. Demonstrations are available by emailing or calling 855-488-3143.

Hypertherm engineers and manufactures industrial cutting products used by companies around the world to build ships, airplanes, and railcars, construct steel buildings, manufacture heavy equipment, and more. Its products include cutting systems, CNCs, and software trusted for performance and reliability that result in increased productivity and profitability for hundreds of thousands of businesses. Founded in 1968 and based in New Hampshire, Hypertherm is a 100 percent Associate owned company, employing more than 1,800 Associates, with operations and partner representation worldwide.

Registration is now open for RobOpsCon