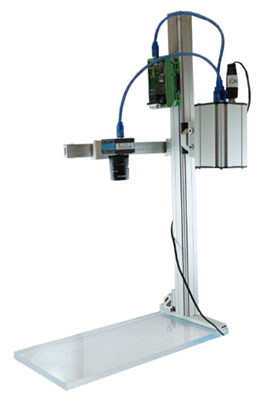 With the EyeMount system, cameras, lenses and industrial lights can be easily and securely integrated into the machine. And also the inspection programs are as easily created with the EyeVision software for visual measurement and inspection with its drag-ang-drop function.

The EyeMount system consists of a multitude of components, which are mounted to each other with a standardized dovetail connection. With that cameras as well as lenses and lighting can be positioned and mounted for example to your production line conveyor belt. Due to the simple clamps of the different components a secure connection is made. With the adapter piece, smart cameras and standard cameras can be mounted swiftly to the right position. And to provide an easy solution for rough environments (vibration, dirt, etc.) there are an abundance of housings for standard cameras, which also supports the EyeMount positioning system. Therefore the cameras can also be used in rough environments. The EyeMount housings are available with protection classes IP65 and IP67. And to build compact systems, powerful embedded boards can be integrated into the same housing or in a separate housing.

When the hardware, consisting of camera, lens and lighting has been fixed, the inspection program can be easily compiled with ready-made evaluation functions of the EyeVision software. The building block system of the EyeVision software allows that simple measurement applications as well as complex object detection or robot-vision applications can be easily solved with the drag-and-drop function. 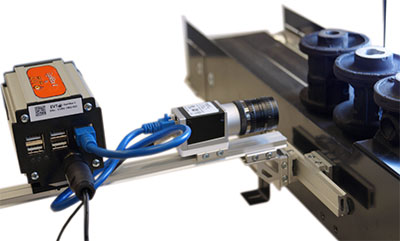 EyeVision supports all standard cameras such as USB, GigE, FireWire, CameraLink and CoaXPress. The EyeVision software makes it possible that with the ready-made evaluation blocks tasks such as:
measuring a turned part, recognizing a color, sending the position of a part to a roboter. Even the evaluation of a thermal image or 3D point cloud is possible and can be easily integrated into the machine.

The machine vision software EyeVision for example is linearly constructed and the graphical user interface are working like building with building blocks. This means: each command is displayed through a quadratic icon. Those icons can be picked up with the mouse and dragged into the Programmeditor. After putting command icon after command icon together the inspection program is executed from top to bottom, once or in an infinite loop.

In EyeVision 3 there is also a PlugIn option. The user can put together a command and display it in the GUI in a self-created icon. Due to the drag-and-drop function, many applications can be solved with only a few mouse clicks. The software contains commands for measurement technology, pattern matching, counting and detecting objects, code reading, color recognition, 3D (point cloud), thermal imaging, etc. 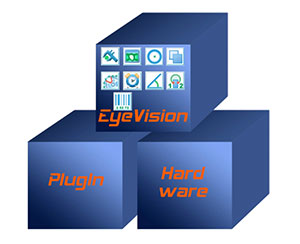 Additionally even the hardware can be picked up such as a tool out of a box. In the so called Hardware Configurator all cameras, which are supported by the EyeVision software are listed. Cameras from Matrix Vision, The Imaging Source, Basler, IDS, etc. Even webcams can be used with the DirectShow VIC (Video Input Channel).

So after the right hardware is chosen and the inspection program created, it has to be integrated into the production line. For example with the help of the positioning and mounting system EyeMount. Only two Allen keys are necessary to fix the camera and the mini-PC – the EyeVBox V. for example – to the conveyor belt. The user even can use the IP65 or IP67 housing for Basler and IDS cameras. Because housings of the EyeCheck Thermo or the EyeCheck 9000, or the CamerCase EyeMount, can be easily combined with EyeMount.