Euresys is a major player in the field of machine vision, developing and marketing high-performance products and services for image acquisition and vision-oriented analysis. We offer a complete range of robust and powerful image analysis software tools for industrial machine vision; as well as innovative and high-performance image acquisition sub-systems for high-end video surveillance and industrial machine vision applications. Euresys is built on strong experience in machine vision and video surveillance offering efficient solutions for OEMs.

Autonomous drones that operate independently or semi-independently of humans offer the potential to take on a wide range of difficult tasks that are not practical for today’s human-controlled drones because autonomous drones require so much less manpower. For example, swarms of autonomous search and rescue drones can fly over wooded areas looking for a lost child. Autonomous drones can continuously patrol the perimeter of a prison to guard against escapes or the perimeter of a nuclear plant to detect attempts at unauthorized entry. Autonomous drones can be dispatched to the scene of a crime and search for and follow suspects fleeing the area. They can follow a vehicle whose occupants are suspected of planning a terrorist attack. They can patrol a vast African wildlife refuge to guard against poachers. And these are just a few of the potential applications.

ALX Systems is a leading supplier of autonomous drones for law enforcement, border control, anti-poaching, power line monitoring, military and many other applications. The company provides a computer vision toolbox including obstacle avoidance, navigation, and image processing that greatly reduces the time and expertise required to program autonomous drones. ALX provides a secure connection between its drones and cloud servers, enabling powerful processing in the cloud of data collected in real time. Military grade encryption technology provides the highest level of security. The company’s drones are designed to work on their own or in swarms of many drones.

ALX recently launched a new drone platform designed for public safety and military applications. The new platform offers the unprecedented capability of being able to react nearly instantaneously to the movement of a person or object. This capability is important in many applications such as following a car. If the car suddenly changes direction, the delay required to acquire and analyze images means that the drone will fly far past the car by the time it is aware that the car has turned. The same problem can occur in a search and rescue operation. The drone may acquire an image that shows the location of a child that it is searching for but by the time the drone acquires and analyzes the image and the drone returns to the location the child may have wandered off.

“Successfully accomplishing missions like this with an autonomous drone requires high speed image processing and very low latency between the camera and the CPU,” said Geoffrey Mormal, CEO of ALX Systems. Latency is the delay before an image acquired by the camera is available for processing by the host PC. “The low latency and high image processing rates that we required for our new drone platform have been available for a while in desktop computers but never in a system that is small, light and rugged enough to fly in a drone,” Mormal continued.

“The Euresys CoaXPress solution is the only frame grabber we are aware of that meets our latency and bandwidth requirements in a flyable solution,” Mormal said. “This is the first time that this level of performance has been achieved while meeting the size, weight and vibration requirements for military and public safety drones,” said Marc Damhaut, CEO of Euresys. The Euresys solutions used in the new drone platform includes the Euresys Coaxlink Duo PCIe/104-MIL two-connection ruggedized CoaXPress frame grabber and ADL’s ADLQM87PC Intel i7 core PC/104 form factor embedded computer. The Euresys frame grabber connects to the camera using the CoaXPress digital video communications standard. CoaXPress HD video is not compressed which makes transfer with zero latency possible. The frame grabber uses direct memory access (DMA) to transfer the image to the PC’s memory without interrupting the CPU. 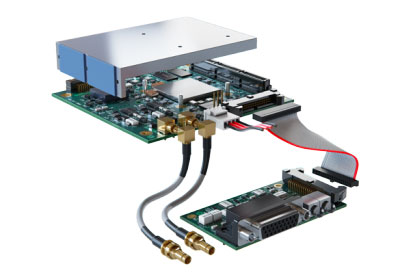 CoaXPress cameras use heavy duty coaxial cables which are the best solution for high speed transmission of data because they provide a higher frequency spectrum than twisted-pair cables. On the other hand, USB-3 provides high speed video transmission but there is a variable delay of several milliseconds between when the image is acquired and when it is available for processing. By the time the image is received over USB-C and processed, the drone could easily lose the car. On the new ALX drone platform, the Coaxlink Duo supports a conventional high speed camera and a thermal imager. It uses a single coaxial cable to transmit images at up to 625 MB/s while simultaneously transmitting control data and triggers and providing up to 13W of power to the camera.

Both frame grabber and CPU are built to the 96 mm by 90 mm PC/104 form factor. They are stacked on top of each other with about 15.4 mm clearance and are connected with the PCIe/104 stacking connector and reinforced with 15.4mm standoffs. The CoaxLink frame grabber uses rugged connectors that are reliable in harsh environments including MIL-STD 810 applications. The complete Euresys solution passed the MIL standard 810G shock and vibration test.

“The Euresys solution provides ALX Systems with low latency and high image processing speeds required for demanding autonomous drone applications such as surveillance and pursuit,” Mormal said. “ALX has built a demonstration system that validates the ability of ALX drone hardware and image processing software and the Euresys image acquisition and analysis solution to deliver unprecedented capabilities in autonomous drone applications. ALX has already received an order to develop a custom solution based on this platform for a military branch of a European country.”

Increasing Vision Performance by Preprocessing on the Frame Grabber