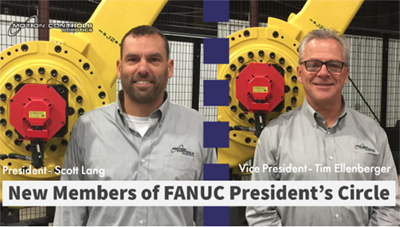 Motion Controls Robotics attended FANUC’s 2020 ASI (Authorized Service Integrators) Conference held in Orlando, Florida. The ASI Conference brings together hundreds of individuals involved in FANUC’s certified servicing integrators’ program to discuss, as a large team, the robot industry. The theme of this year’s conference was LEVERAGE. This theme points to how robot integrators use automation to help leverage a customer’s process and competitive advantage using new developments in robotics and automation.

Scott Lang, President and Tim Ellenberger, Vice-President attended the conference and were presented the FANUC President’s Circle of Achievement Award Wednesday, February 12 at the FANUC award banquet. They accepted the award on stage from FANUC’s President and CEO, Mike Cicco and Dick Motley, Director of the Authorized System Integrator Network. Both Lang and Ellenberger felt honored and humbled to be presented the award. This is only the 10th time this award has been given since the inception of the ASI Network.

According to FANUC, “This most prestigious award recognizes individuals whose long-term commitment, technical, sales and marketing contributions, and industry leadership have resulted in record-breaking sales and robotic industry growth.”

Lang commented, “To have our names placed among such impressive and influential leaders is a great honor. We have enjoyed a long and mutually beneficial relationship with FANUC and look forward to a bright future.”

Motion Controls Robotics has been a strategic partner and a member of the FANUC ASI Network for over 21 years. During this time, MCRI has received several awards including the FANUC Sales Leadership and Outstanding Sales Growth Awards.

“Our partnership with FANUC has provided us with great opportunities to actively grow MCRI and our industry. To be selected to be part of this group of such outstanding leaders and visionaries is really a testament to our amazing MCRI team. Our MCRI team has been key to our company growth for 25 years and provide our customers the best solutions to their automation needs,” stated Ellenberger.

The members of the FANUC President’s Circle are displayed prominently on the wall at the FANUC North America headquarters in Rochester Hills, Michigan.

Motion Controls Robotics has been designing and integrating FANUC robot systems for 25 years and being presented with the President’s Circle of Achievement Award at the 2020 conference is a great honor.