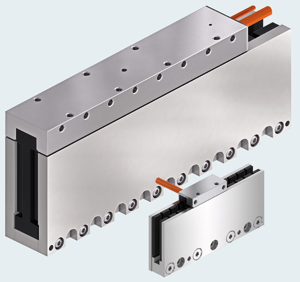 The new ironless linear motors by Rexroth position small masses with superior precision and maximum synchronization. Not only are the motors in the MCL ironless product line extremely dynamic, they are also easy to integrate into machines. Typical areas of application include assembly and handling technology as well as semiconductor and solar technology.

The MCL product line features four sizes with graded lengths and a maximum force range of between 20 and 1,700 newtons. This enables an acceleration of up to 300 m/s² and a maximum speed of up to 1,200 m/min. To increase performance even more, several primary components can be set up in a sequence or parallel to each other. The compact design provides different mounting planes for mounting primary and secondary parts, providing the highest flexibility in construction design.

Optionally, the linear motors also come with a Hall sensor unit to detect the position for the initial commutation.

Compared to ironcore motors, the MCL product line of linear motors distinguish themselves with the ironless design of the primary part, which contains the three-phase winding. The three-phase copper winding is completely compound-filled and not inserted into an iron core. The primary part carrier is made of aluminum and is used to mount the primary component and for heat removal. The U-shaped secondary part contains permanent magnets and encloses the primary component. This design means that slots cannot cause an attraction or cogging force between the primary and secondary part. The force constant is linear due to the eliminated saturation effect. This makes it possible to use compact, cost efficient rail systems.

These aspects combined with the relatively small mass movement by the primary part create a high level of dynamics with a very high degree of precision.

Typical areas in which ironless linear motors can be used are applications where it is important to move small masses at the maximum possible cycle speed with extremely high precision. That includes pick-and-place machines used in the semiconductor segment as well as those used in general  automation processes. The exceptionally high synchronization of the MCL motors also makes them perfect for use in measuring or laser structuring machines for solar technology.

Bosch Rexroth AG is one of the world’s leading specialists in the field of drive and control technologies. Under the brand name of Rexroth the company supplies more than 500,000 customers with tailored solutions for driving, controlling and moving. Bosch Rexroth is a partner for industrial applications and factory automation, mobile applications and using renewable energies.

As The Drive & Control Company, Bosch Rexroth develops, produces and sells components and systems in more than 80 countries. In 2009 Bosch Rexroth part of the Bosch Group, achieved sales of around 4.1 billion Euro with 34,200 employees.

The Bosch Group is a leading global supplier of technology and services. According to preliminary figures, some 283,500 associates generated sales of 47.3 billion euros in the areas of automotive and industrial technology, consumer goods, and building technology in fiscal 2010. The Bosch Group comprises Robert Bosch GmbH and its more than 300 subsidiaries and regional companies in over 60 countries. If its sales and service partners are included, then Bosch is represented in roughly 150 countries. This worldwide development, manufacturing, and sales network is the foundation for further growth. Bosch spent some four billion euros for research and development in 2010, and applied for over 3,800 patents worldwide. With all its products and services, Bosch enhances the quality of life by providing solutions which are both innovative and beneficial.