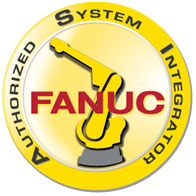 Integro Technologies offers its customers a seamless level of automation to their production lines through the synthesis of intelligent robotics, machine vision expertise, and support services. As a FANUC Authorized System Integrator, Integro’s customers will increase production, reduce cost, and increase profits.

FANUC America prides itself in having an extremely talented and experienced group of robotic integrators that are part of their Authorized System Integrator Network for automation systems. From pharmaceutical to woodworking, FANUC America offers industrial robots for almost any application.

“FANUC is a global leader in manufacturing automation and their reputation is unparalleled with innovative robotic solutions that offer superior performance,” said Shawn Campion, President and CEO of Integro Technologies. “Integro Technologies is excited to integrate our 3D Vision Solutions with FANUC’s robotic systems. We look forward to a successful partnership that provides invaluable benefits to our customers.”

About FANUC CORPORATION
FANUC CORPORATION, headquartered at the foot of Mt. Fuji, Japan, is the global leader and the most innovative manufacturer of Factory Automation, Robots and ROBOMACHINE’s in the world. With 263 offices in 108 countries, FANUC provides world-class customer service and support.  Since its inception in 1972, FANUC has contributed to the automation of machine tools as a pioneer in the development of computer numerical control equipment. FANUC technology has been a leading force in a worldwide manufacturing revolution, which evolved from the automation of a single machine to the automation of entire production lines.  For more information visit: http://www.fanuc.co.jp/eindex.htm.

FANUC embraces a culture of “Service First” which means that customer service is our highest priority.  We are committed to supplying our customers with parts and support for the life of their FANUC products.