When original equipment manufacturer, Weiler Engineering, upgraded the drive systems on its aseptic blow-fill-seal machines, a problem with its existing controller compatibility was limiting the functionality of its equipment. A one-on-one PLC-integration engineering solution by Siemens not only provided the machine-operation interface Weiler Engineering needed, but also significantly expanded its applications flexibility.

Upgrading components in manufacturing process equipment is something that plant engineers take very seriously, and think through carefully. Equipment upgrade options are inspected and tested empirically before a selection is made. The newly modified machine must operate flawlessly to fulfill the requirements of the facility, and must integrate smoothly with other designated equipment within the plant. However, too often engineers end up settling with less capability from their new components solely because of compatibility issues with their control systems. These compatibility issues can bring the entire upgrade project to a standstill until a suitable solution is found.

For original equipment manufacturers the endeavor to make component changes to their production machines is critically magnified in importance. OEMs have to take into consideration the machine’s operating variables for the wide spectrum of their clients’ plant usages, as well as the integration of the full gamut of equipment options that will interface with the machine. Weiler Engineering, Inc., an original equipment manufacturer of aseptic blow-fill-seal machines, is one company that confronted serious PLC compatibility issues when its original controls supplier changed its product offering.

The company uses the latest technological advances in equipment design and systems to ensure the highest level of quality in the production of sterile liquid products. The ability to provide these products, which must meet corporate, scientific, regulatory and end-user requirements, can be a quite demanding. These application challenges are met by specific container and closure designs available with its systems. Weiler offers several machine models designed to manufacture containers ranging in size from 0.2mL to 1000mL at production rates of up to 15,000 units per hour, depending on container configuration.

‘‘We have been using PLCs on our machines for 25 years, and a specific controller for a long time,’‘ says Robert Mazur, Manager of Electrical Engineering for Weiler. ‘‘The problems came when the company that was providing our PLCs decided to make the product line we were using obsolete. That company’s new, second-generation PLCs were not up to our standards. Another PLC manufacturer was brought in to help us, and it was unsuccessful - they could not provide a completely functional controller for our machines. We were quite concerned, but it was not the manufacturer’s PLCs that failed, it was the integration of its PLCs with our equipment that was the problem.’‘

‘‘After a number of unsuccessful attempts to resolve the PLC difficulty we approached Siemens, and asked them to come in, look at our product line, and tell us what we needed,’‘ Mazur says. ‘‘We wanted to see how Siemens could help us out. Siemens recommended its SIMATIC S7-300 line of PLCs, which we subsequently purchased.’‘ 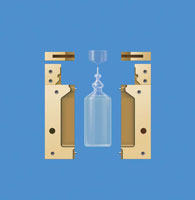 Weiler’s ASEP-TECH equipment works like this: It has what is called an ‘extruder’. The equipment is doing a continuous plastic extrusion, anywhere from five parisons (round tubes of plastic) to sixteen parisons. The machine carriage, which holds a mold, will go back, and while the tubes are open the mold will close on those tubes. The parisons are then cut, and the carriage is moved forward, while plastic just continues to come out for the next cut. The machine then will fill the containers, formed inside the mold, with a liquid, with anywhere from five to 60 fill nozzles. Then the nozzles will come out of the mold, and the containers are sealed off with a final sealing die. After forming and cooling, everything opens up and the carriage will pull back and repeat the cycle. The formed containers are conveyed out of the machine room to a remote station where excess plastic is removed and the finished product is conveyed to final packaging.

When Weiler began developing an all-electric machine it used a different PLC manufacturer from the drive manufacturer, causing the integration to become a major problem. The company then brought in Siemens which not only engineered a one-on-one solution to its PLC compatibility problems with the drives, but also provided engineering for the debug time needed. Weiler uses the Siemens SIMATIC S7-300 series PLC and touch screens on its all-electric equipment - which give its machines an extremely high level of flexibility in machine control and systems integration.

‘‘From the very beginning, Siemens backed us up with its engineering staff, and helped us to develop a well-documented and well-structured software program that did the communications so we could run our machines,’‘ Mazur continues. ‘‘This is something extra that Siemens brought to the table. When a company is having trouble it is very useful when the supplier has personnel that can come in and understand what needs to be done. Siemens understood what needed to be done to communicate to a third-party device that had issues, and how to help us work through those issues. Even when it is with another’s products, Siemens can make them all communicate together.’‘

The SIMATIC S7-300 is a modular PLC platform that is optimized for high-performance machine and factory automation, facilitating integrated and economical system solutions in centralized and distributed architectures. There are CPUs with integral I/O, integrated technological functions, and integrated communications interfaces. They all have one thing in common - efficient processing speed for short machine cycle times. The modules are simply hung on a DIN rail and screwed on to form a rugged, electromagnetically compatible configuration. The backplane bus is already integrated into the modules - the bus connectors can just be plugged in. With the varied range of modules for the SIMATIC S7-300, centralized expansions and simple distributed structures can be configured.

‘‘The Siemens PLC gives us the capability of doing on-line changes, flexibility that allows our customers to see what is happening in the machine,’‘ Mazur says. ‘‘From a programming code method there are advantages, in that our customers can see the code, they can troubleshoot it, yet we can lock in certain functions - like code calculations - that we don’t want them to change.’‘

‘‘Siemens’ system is definitely more advanced when it comes to Ethernet or Profibus to alert our client’s plant maintenance that there is a problem with the machine,’‘ Mazur explains. ‘‘Each of the input/output cards that we use, and each of the drops that we use is self diagnostic. If anything should go wrong - shorts, or a bad connection on a particular card - it will indicate on the card that it has a problem, and internally set alarm bits that are trapped onto a diagnostic screen. It immediately gives the maintenance people at our customer’s site a very fast way of finding the card that is the problem.’‘

Siemens offers more options for graphics on its touch screens than what Weiler had been using. It went from about 15 screens that were used for basic operations, to about 75 - 80 screens now. Weiler still has the 15 or so basic screens that most of its customers are used to, but now it has everything else behind that including all the screens used for troubleshooting and diagnostics.

The system also has the interface flexibility to work with Siemens’ own products as well as third-party products that are Profibus registered. Weiler can just connect the wires and control them.

‘‘We bring very industry-specific experience to our OEM clients,’‘ says Michael Cizmar, Account Manager, Siemens. ‘‘Our technicians are experts in our clients’ industries because they come directly from our clients’ line of business. We are intimately familiar with their equipment, and the problems that they run up against every day with that equipment. Because of this Siemens is in a strategic position to better help them find solutions.’‘

About Siemens
Siemens Energy & Automation, Inc. is one of Siemens’ operating companies in the U.S. Headquartered in the Atlanta suburb of Alpharetta, Ga., Siemens Energy & Automation, Inc. manufactures and markets one of the world’s broadest ranges of electrical and electronic products, systems and services to industrial and construction market customers. Its technologies range from circuit protection and energy management systems to process control, industrial software and totally integrated automation solutions. The company also has expertise in systems integration, technical services and turnkey industrial systems.

Siemens AG (NYSE:SI) is one of the largest global electronics and engineering companies with reported worldwide sales of $107.4 billion in fiscal 2006. Founded nearly 160 years ago, the company is a leader in the areas of Medical, Power, Automation and Control, Transportation, Information and Communications, Lighting, Building Technologies, Water Technologies and Services and Home Appliances. With its U.S. corporate headquarters in New York City, Siemens in the USA has sales of $21.4 billion and employs approximately 67,000 people throughout all 50 states and Puerto Rico. Eleven of Siemens' worldwide businesses are based in the United States. With its global headquarters in Munich, Siemens AG and its subsidiaries employ 475,000 people in 190 countries.