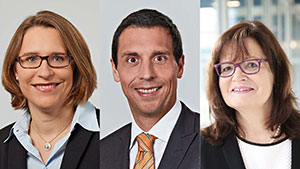 Frankfurt — The International Federation of Robotics (IFR) appoints Dr. Susanne Bieller as new General Secretary. The 41-year-old will take office on 1 May 2019 from Gudrun Litzenberger, who is retiring. At the same time, Litzenberger will hand over the management of the IFR Statistical Department to Dr. Christopher Müller.

The rapid rise of robot use and automation has significantly expanded the tasks of the International Federation of Robotics worldwide. “As an `ambassador of robotics`, I am looking forward to supporting the dynamic development of robotics and continue IFR´s successful work in future,” says Dr. Susanne Bieller. “One of my focus tasks will be to ensure a better understanding of the complex industry issues around the globe”.

Dr. Susanne Bieller has up to now worked as a project manager for the European Robotics Association EUnited Robotics for five years. She began her professional career as managing director of the flat-panel display group at the German Engineering Federation (VDMA) in Frankfurt, where she worked for seven years. After completing her academic career, the PhD Chemist went to the European Commission in Brussels where she looked into public relations and communications.

Dr. Christopher Müller (37) is head of the IFR Statistical Department and responsible for worldwide industry data and analyses. In this role, the PhD economist also takes care of the annual “IFR World Robotics Report”. Today, this study is regarded as the most important source for global robot statistics and covers all market-relevant activities of industrial and service robots.

Gudrun Litzenberger took over the responsibility for World Robotics Statistics in 2003 and has been General Secretary of the IFR since 2008. Last summer she received the Joseph F. Engelberger Robotics Award - the world’s most important industry award. The jury honored her outstanding commitment. She has developed the robot statistics and established the International Federation of Robotics as the voice of robotics worldwide.

The International Federation of Robotics represents more than 50 manufacturers of industrial robots and national robot associations from over twenty countries and was founded in 1987 as a non-profit organization.

ABB survey finds 70% of US businesses looking to bring pro-duction closer to home, robotic automation and workforce up-skilling essential to return of operations