Using market insight coupled with new technology, Sunnen has been able to grow in a downward economy. The company expanded its platform of high production, high precision bore sizing and finishing systems to include maintenance and repair operations honing machines. The deeper secret to this 85-year-old OEM’s success is its ability to adopt simpler, yet more advanced and cost-effective motion control.

It was an evolutionary decision, says Carl Mik, Product Design Engineer. Traditionally, the company’s bore sizing and finishing systems have been customized, high-end designs. Having identified a new market segment opportunity, the immediate problem was system cost versus the market’s willingness to pay. But the larger and longer-term problem was how to evolve the company’s technology platform while maintaining its competitive advantages in systems design, manufacturing and service efficiency.

An early breakthrough came when Sunnen learned that Siemens could offer a basic performance servomotor with resolver feedback for the price of an AC motor. But Sunnen still faced the challenge of developing an all-new system design for low-cost honing that would be consistent with the company’s established product platform, supported by the multi-axis high-performance Sinamics S120 drive line and Simatic automation platform from Siemens.

This need for platform consistency is an industry-wide challenge, as OEMs and their end-customers evaluate the cost-performance advantages of emerging motion control solutions versus traditional hydraulic, mechanical and electro-mechanical machine system designs. For Sunnen, this evaluation has been facilitated by Siemens mutual interest in the possibilities of new servo-based systems design.

“I have been on the motion control side from the beginning,” says Product Engineer Mike Nikrant. “Back in 2002-2003, we did a lot of research on different communication bus structures and what people had to offer. We chose Profibus because of component availability and cost, along with its high acceptance in the market. Then, we began using Siemens drives because they were the most flexible and configurable. We went with them on our KGM product line, which required extreme accuracy for all axes of motion when finishing cylinders. Then, we used a lot of the same components when we introduced our SV vertical honing machines.”

“When we first started the SV vertical honing line, we were attempting to use ball screws. At the time there was only one company that had a motor that could handle the load we were doing, because of the reciprocation. Then Siemens designed a motor that fit our application requirements and assisted us in our initial synchronization and tuning. We established a common DC bus drive structure with the Siemens drive platform, which made it possible to have all the same drives in the system for servo or vector applications. It is a very clean and proficient design because there are no mixes and matches of drive types. Everything just flowed a lot better with that solution and our customers like this common approach and service efficiency.”

As Sunnen’s attention moved last year to the development of a basic large bore horizontal honing system called the HTA, both Nikrant and Mik were on the same page regarding product platform evolution. Joining them were other engineering team members, including Russ Jacobsmeyer, the company’s chief technology officer, who oversees technology adoption in support of the company’s global growth. 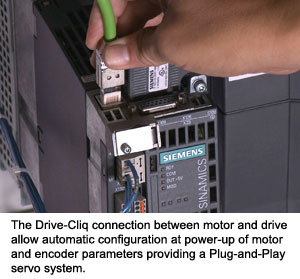 According to Jacobsmeyer, Siemens brings a global support capability that is becoming increasingly important to Sunnen’s growth strategy. He says the relationship is based on more than just meeting a spec. It is based on system performance exploration. “One reason why we like working with Siemens,” Jacobsmeyer adds, “is we have built a partnership with them and they understand what is required of our products. They can make suggestions in an intelligent manner, helping us solve problems that add value for our customers. Precision bore sizing and finishing is a very niche capability that requires significant engineering content and resultant product performance. Our customers value what we have to offer with our systems and our ability to solve their difficult bore sizing and finishing applications.”

Jacobsmeyer recalls that when the engineering team first looked into developing a new basic bore sizing and finishing system to fill a gap in the Sunnen product line, Siemens was the logical resource.

In regard to control system design, “We didn’t have anything at that point,” Jacobsmeyer says. “We heard from our customers and engineers in the field that there was a need for a basic economical system. However, we were not sure if we could satisfy the product requirements and meet the market price point.”

Mik agreed about the scope of the engineering problem. “Remember, this was August and September of last year,” Mik says. “So I started programming and put a prototype system together and the biggest issue I found was spindle response time, due to delays in signals between the display, PLC, and a servo and general purpose drive. We had 300 milliseconds altogether, which may be acceptable from the standpoint of introducing a basic system at a basic system cost, but it was unacceptable for our application, so we decided to go back to Siemens.”

This was in January, with production of the new basic system to occur in May or June, Mik explains. “That is when Siemens told me that they had this new Sinamics S110 basic performance servo drive coming out, along with their new MP177 six-inch touch display, which allows soft PLC capability with the WinAC MP software. The direct connection between Sinamics S110 servo drive and MP177 display over Profibus made the system very cost effective and responsive.  Not only did this reduce components, but also made it possible for us to stay in line with our migration to a single platform on the Sinamics family of drives because we could use the same Step 7 software already being used to program our S7 automation on other machines. 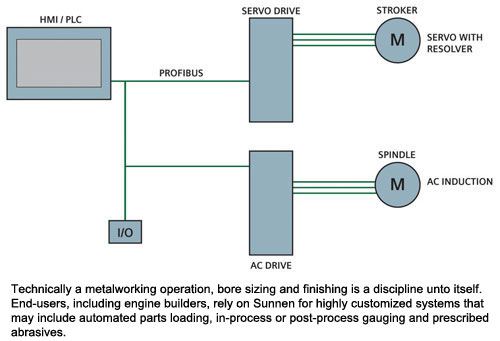 According to Mik, the new basic servo positioning package gave Sunnen an unexpected level of performance for basic machine development.

“If you think about trying to stop an AC induction motor to do stroking back and forth, it’s pretty difficult. Even when applying dynamic braking and braking resistors, traditionally acceptable reversals on a tube-hone machine are around a ¼” repeatability. But our tests show the new system is achieving under 0.015” and this is a low-cost system.”

Mik explained that the key components of the new system, are an easily programmable soft PLC at a low-cost point and a low-cost distributed motion control — solutions brought about by the new Siemens Sinamics S110 drive and 1FK7 servomotor.  This also accomplished a new level of simplicity for this basic machine because the Drive-Cliq cable between the Sinamics S110 drive and motor provides automatic configuration as well as the feedback of the servo system. Additionally, the MP177 with WinAC software made the configuration and communication simple and straightforward.

”We have a color TFT display, we are programming everything with ease and we can even automate the machine. It’s not in the original spec, but we could do this to add even more value to our offering. And spindle response time is down in the 25-millisecond range, instead of 300,” adds Mik. “For such a low-cost machine, I cannot believe we have such a capable system.” 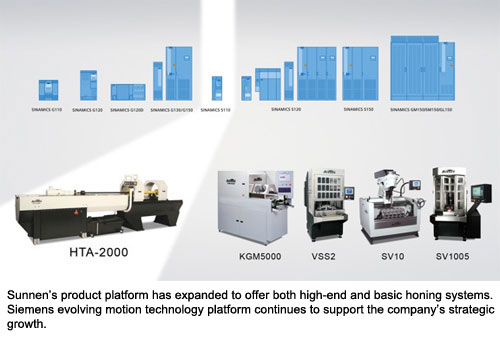 Mike Nikrant believes alignment between the Sunnen and Siemens product platforms is helping to drive Sunnen’s business forward. The decision to develop new, more basic systems was facilitated by the product range of Siemens Motion Control solutions. The two companies are already talking about performance improvements for Sunnen’s next generation of high-end PC-based systems with integrated safety functions.

“Siemens is coming out with motion control ideas that fit what we want to do,” Nikrant observes. “For our high-end PC line, we are trying to come up with a common circuit for multiple machines. Siemens drives, bus structures and components fit really well in that respect because of the way some of the logic can be split up as far as the controllers go. Their Sinamics drives are easy to use and highly configurable. The same piece of hardware can be used for multiple functions. Some systems can be configured to use any functionality the user can conceive. On other systems, where there is no need for all that functionality, a product like the Sinamics S110 servo system provides a simple and efficient solution. And control, programming and communication are all the same. The Siemens platform works well for us, for both the higher and entry level.”  Jacobsmeyer adds, “Building upon common platforms from Siemens, which are stable and high performance, serves our customers and entire Sunnen organization quite well – around the globe, enabling us to more efficiently use our global resources to engineer, construct, service and sell product.”

According to Sunnen’s David Moehn, Manager of Engineered Machines and Custom Systems, the adoption of the Siemens Sinamics S110 servo drive is just part of the story for Sunnen.

“The bigger story is the Siemens ability to work with us, standing by us and helping us find solutions,” Moehn says. “This relationship continues to improve our market success by getting us to market faster and ahead of competitors.”

Phil Hanna, Sunnen’s Global Product Manager for Machines agrees: “The goal of partnering with Siemens has been to standardize control systems across all our machine platforms – horizontal, vertical, and tube hones, of which the new HTA machine is the latest edition as an entry level market machine. This is part of an ongoing effort at Sunnen to produce modular designs that can easily be modified to new configurations. The SV machines are a perfect example of this concept. The modular columns with integral Siemens controls can be easily configured on a custom basis to optimize the customer’s process. One, two, three etc. columns depend on the customer’s stock removal and geometry requirements. This lends great flexibility to the product line. And, with component standardization and Siemens global presence, the machines are much more supportable globally because of Siemens technical expertise and resources.