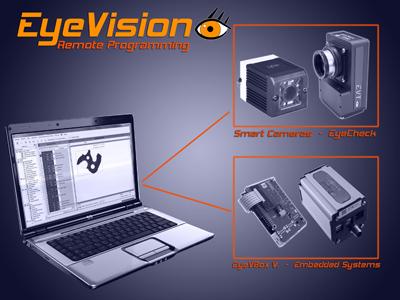 EyeVision 3 celebrates its birthday. Three years ago EVT presented the machine vision software with completely revised toolset. Since then several improvements and adjustments took place. As in the previous version remote programming is now available for all hardware platforms. In most cases the remote systems are connected through an Ethernet interface. But as remote programming is not necessarily limited to just one hardware it is also possible to use any other connection (such as FireWire). During the remote programming the programming interface (GUI – graphical user interface) is running on the PC or Laptop. In case of a smart camera such as the EyeCheck series, the created inspection program is transferred onto the camera with a synchronizing mechanism. Thereafter the connection between PC and remote device can be removed. The inspection tasks are thereafter executed on the smart camera autonomous. The remote connection can be carried out via LAN cable but also wireless. Remote programming even works with „non-intelligent“ cameras. If for example the camera is connected to an embedded PC such as the EyeVBox V., it can be also connected to a PC. The programming is then carried out the same way as with the smart cameras.

Concerning the interfaces, EyeVision 3 supports USB (2.0 and 3.0), GigE, Camera Link, FireWire and CoaXPress. EyeVision 3 is running on Linux and Windows. The Linux verison is available for ARM CPUs such as e.g. most of the EyeCheck smart cameras or the EyeVBox V., but also on for x86 CPUs such as the Adlink camera or PCs. The EyeVision 3 Windows version is only available for x86 CPUs. For processors such as MIPS and DSP, EVT has still some smart camera options.

Additionally, EyeVision 3 offers the possiblility for the user to create their own commands via the Plug-in function and integrate them into the EyeVision graphical user interface (GUI). In EyeVision 3.0 own commands can be provided as plug-in dll. EyeVision will scan a plug-in dll folder during start up and add all commands to the command control.

A command will appear in the command tree of EyeVision as a graphical symbol and can be dragged into the inspection program.