LASER COMPONENTS USA specializes in sales, distribution and marketing of components in the laser and optoelectronics industry. We have been serving customers over 15 years in North America with products from our manufacturing sites in Germany, Canada and the US, as well as from well-selected international suppliers. Our strength lies in the ability to offer FLEXPOINT® laser modules (at different wavelengths and power) and colorPol® dichroic glass polarizers (for the UV, VIS, and IR range) as single pieces or series production. Applications include alignment, positioning, and measurement. 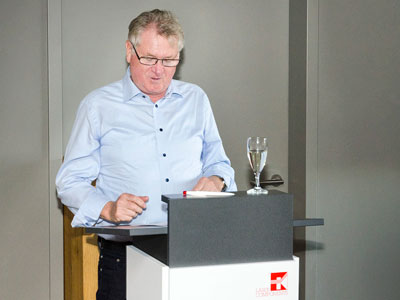 Bedford, NH: After 35 years at the helm of the LASER COMPONENTS Group, company founder Günther Paul (72) is taking full time retirement. In 2014 he transferred his company shares to his sons Patrick (40) and Felix (38). On 18 April the entire staff said goodbye to their long-time boss with a surprise celebration at the company headquarters in Olching, Germany. Once again, they reviewed the most important milestones in the company‘s history – from the beginning as a two-man business in the family home in 1982 to today’s international group with branch offices and production facilities in five countries. Long-standing companions and representatives of the overseas branches sent video messages to wish Günther Paul all the best for this new chapter in his life.

In a short address, Patrick Paul emphasized the successful handover process. Over the years, more and more competencies have been transferred from one generation to the next, thus avoiding any negative effects on the company‘s growth.

The future retiree, who was busy working in the garden just before the unexpected invitation to lunch, was deeply touched by his farewell party and thanked his employees for the successful surprise. He promised to remain in touch with the company, as long as his numerous hobbies gave him time to do so.

About Laser Components
LASER COMPONENTS specializes in the development, manufacture, and sale of components and services in the laser and optoelectronics industry. At LASER COMPONENTS, we have been serving customers since 1982 with sales branches in five different countries. We have been producing in house since 1986 with production facilities in Germany, Canada, and the United States. In-house production makes up approximately half of our sales revenue. A family-run business, we have more than 220 employees worldwide.

DOEs for LiDAR and 3D Imaging

Opening Up New Opportunities in Photonics!