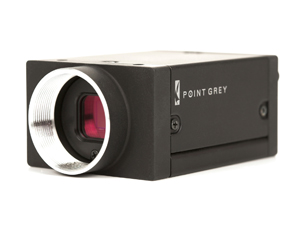 The Grasshopper Express camera series is housed in the same compact housing as the original Grasshopper, but offers a host of new features and a new hardware architecture designed to accommodate a wide range of high speed quad-tap image sensors. The first available model, the GX-FW-10K3M-C, uses a monochrome version of the Kodak KAI-01050 1 megapixel 1/2-inch CCD image sensor. The KAI-01050 sensor features broad dynamic range, low smear, and a 4-output readout architecture that allows the camera to generate 1024 x 1024 pixel images at up to 70 FPS.

Every Grasshopper Express camera is equipped with a 32 MByte frame buffer, 14-bit analog-to-digital converter, and on-board temperature and power sensors to monitor camera status. Like all Point Grey cameras, the GX-FW provides automatic control of most camera properties, such as gain, exposure, and white balance; user configuration sets for defining custom power-up settings; and customizable region of interest and binning modes. The Grasshopper Express complies with version 1.32 of the IIDC specification, which allows it to be used with many third-party software packages. Also included with every camera is the FlyCapture® SDK, a full software library that provides a common control interface for all Point Grey cameras under both Windows and Linux.

"We are excited to expand our imaging product lineup with the launch of the Grasshopper Express camera series and the addition of the Kodak KAI-01050 CCD to our sensor portfolio," says Michael Gibbons, Product Marketing Manager at Point Grey. "The camera's 800 Mbit/s FireWire interface allows full resolution images to be transferred at 70 FPS and is well-suited to building low latency, highly deterministic, multiple camera networks. The square 1:1 aspect ratio of the KAI-01050 sensor and industry-leading price-performance further make the Grasshopper Express an ideal solution for industrial machine vision applications."

The Grasshopper Express GX-FW-10K3M-C, list priced at USD $1995, is available to order now from Point Grey and its network of distributors. Additional models are planned to be released later in 2011

Point Grey Research, Inc. is a worldwide leader in the development of advanced digital camera technology products for machine vision, industrial imaging, and computer vision applications. Based in Richmond, BC, Canada, Point Grey designs, manufactures and distributes IEEE-1394 (FireWire), USB 2.0, Gigabit Ethernet, and Camera Link cameras that are known for their excellent quality, performance, and ease of use. A broad range of hardware, software and mechanical engineering skills has allowed Point Grey to successfully bring many innovative and ground-breaking products to market. This drive for innovation has led to many industry firsts, including the first and smallest 1394b digital camera.

Since being founded in January of 1997, the company's approach to product pricing, quality control, and customer service has attracted thousands of customers worldwide, and its organic growth through product sales has enabled the company to expand significantly without any outside investment. Point Grey currently employs more than 100 people worldwide, and has a wholly-owned subsidiary in Germany that provides sales and support services to customers in Europe, Africa, and Israel. Point Grey's office in Japan works closely with the company's network of distributors in Japan, Korea, China, Singapore, and Taiwan.