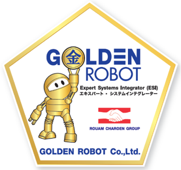 Montreal (QC) – Jabez Technologies is pleased to announce that Golden Robot has become the first authorised distributor of Robotmaster in Thailand.  Golden Robot, a recent startup and a fast growing system integrator, is located in Rayong Thailand. Golden Robot is a member of the Rouam Charoen Group (RC-Group). RC-Group is a group of 15 companies with more than 500 employees who is a major distributor of industrial equipment throughout Thailand for over 30 years being an authorized distributor for brands including: Dewalt, Stanley, Kobelco, Daito, Atlas and Copco.

Having seen the emerging opportunities in robotic welding and recognizing the enabling role of effective programming software, Golden Robot has become an authorized distributor of Robotmaster.  Golden Robot is also an authorized distributor of OTC Daihen Robots. OTC Daihen Asia (OTC-DA) is one of the principle suppliers of advanced welding equipment, consumables and robots in Thailand as well as Southeast Asia, Middle East and Oceania. 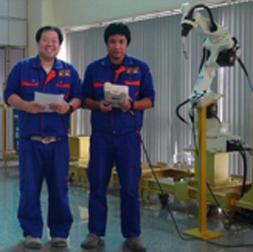 Golden Robot is managed by Dr. Kitti Suwanratchatamanee and Mr. Pongsakorn Sakudomlert.  Dr. Kitti, who speaks Thai, English and Japanese, has a PhD in Robotic Engineering and loves working with robots which have been his passion since child hood. Dr. Kitti, is also an Invited Researcher at Waseda University in Japan where he completed his PhD.

Mr. Pongsakorn, has a B.Eng. inMechatronic Engineering from King Mongkut’s University of Technology in Thailand. Dr. Kitti and Mr. Pongsakorn both have worked at OTC-DA and are specialists in robotic welding.  They are held in high esteem throughout the Thai automotive industry having installed and supported hundreds of robots at manufacturer’s and sub-contractor’s production facilities.

Golden Robot will bring practical robotic welding knowledge to the Robotmaster network and are a welcomed addition to the fast growing Robotmaster team.

For further information about Golden Robot,  you can visit their web site at http://www.rc-goldenrobot.com/

About Intercam SA
Robotmaster is distributed in Europe, South East Asia and China by Intercam SA. Pioneers in CAD/CAM software distribution since 1991, Intercam’s current focus is the development of the robotic software market through Robotmaster.

Stäubli Robotics to exhibit at ATX 2017