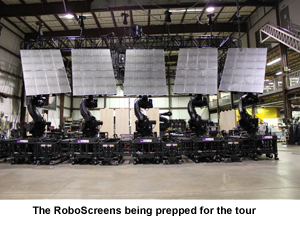 AUBURN HILLS, Mich. – The Bon Jovi concert experience has always been a marvel of sight and sound and “The Circle Tour” which opened February 19th in Seattle’s Key Arena has taken this production innovation to a new level. A primary component of the visual intrigue of the show is five ABB IRB 7600 industrial robots positioned toward the back of the stage, each with a 6’ x 9’ LED video panel attached to their articulated arm. The robots and screens are integral to the concert production, moving to the rhythm and beat of the music while displaying real time video footage of the show and digital animations. At various intervals the five robot arms move into a formation where the LED panels become one continuous, five panel screen.  The robots will accompany the nearly two-year long tour, which currently features approximately 60 concerts in North America and Europe, with additional dates likely to be scheduled. This will be the band’s longest tour since the late 1980s. 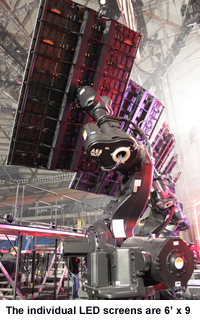 The creative concept that brings the robots to life on stage is RoboScreen™, a patented technology developed by inventor Andy Flessas, the founder and president of Robotic Arts of Las Vegas, NV. Flessas’ experience with robots began in the mid-1990s, and reached elite status in 2006 when he completed a robotic programming, design and operation certification program at the ABB training facility in Auburn Hills, MI. Along the way he developed the idea of mounting a graphic screen on a robotic arm to bring controlled movement to the visual media and create a unique viewer experience.

The intelligence that allows the robots to be precisely choreographed with the music and the onstage production is Robot Animator™, a software program extension that enables 3D computer animation. The proprietary software developed by Flessas provides a separate interface to animate the movement of the ABB robots as if they were on-screen characters. Once the desired movement is established Robot Animator channels the code directly into ABB’s IRC controller and the robots replicate the movement on stage.

“We were able to take the ABB robots out of the factory and turn them into rock stars mainly through the power of the IRC5 controller and its ability to accept the precise movement established in Robot Animator,” said Flessas. “The programming we are doing for The Circle Tour could bring a totally new thought pattern to be used in advanced manufacturing applications in the future. This entertainment application may allow it to break through.” 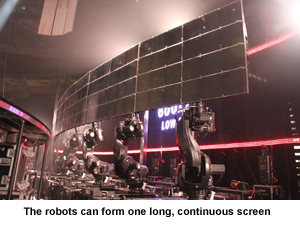 When Jon Bon Jovi and the tour directors were presented the RoboScreen idea they were initially attracted by the uniqueness of the concept and the physical presence of the IRB 7600 robot. They were sold when they saw the graceful, elegant choreography that could be achieved, and they learned of the vast number of installations and support network that ABB has around the world.

“Andy Flessas is a true visionary and we are excited about the unique application he has developed for ABB robots,”   said Joe Campbell, vice president of sales and marketing, ABB Robotics, North America. “This collaboration with Robotic Arts and Bon Jovi is certainly one of the most unique applications we have been involved with.”

Each IRB 7600 robot is entrusted with a custom designed LED panel that weighs 700 lbs and is comprised of 24 individual sub-panels arranged in a six column by four row grid. The I-MAG or image magnification footage, approximately 85% of what will appear on the screens during the show, is fed by multiple cameras set up throughout the concert venue. The animations that fill the balance of the screen time are a combination of pre-programmed 3D graphics and fully rendered, real time computerized reactions to the beat of the music. 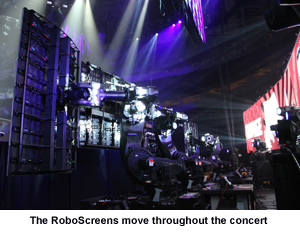 “Industrial robots being part of a major concert tour is unprecedented,” said Flessas. “They provide a big show element to the performance and help present the complete entertainment experience that is synonymous with the Bon Jovi brand.”

The design and integration of the rigging system that allows the five RoboScreens to fit seamlessly into the touring platform was done by Tait Towers, the world renowned tour production company headquartered in Lititz, PA.

The Circle Tour is the second major entertainment production that ABB robots have been involved with in the span of a year. In 2009 a series of ABB robots were extensively featured in the climactic scene of the “Terminator Salvation” movie starring Christian Bale.

About the IRB 7600
The IRB 7600 is ABB’s largest and most powerful robot with handling capacities up to 630 kg (1,388 lbs) and a reach of 3.5 m (11.4 ft). It is used for a wide variety of industrial applications including machine tending, press break tending, material handling, assembly, spot welding and cast cleaning.

About the IRC5 Controller
IRC5 is ABB’s fifth generation robot controller. Its motion control technology is integral to a robot’s performance in terms of accuracy, speed, cycle-time, programmability and synchronization with external devices.

About ABB, Inc.
ABB (www.abb.com) is a leader in power and automation technologies that enable utility and industry customers to improve their performance while lowering environmental impact. The ABB Group of companies operates in around 100 countries and employs about 117,000 people.