First robot to collaborate directly with employees at Volkswagen plant 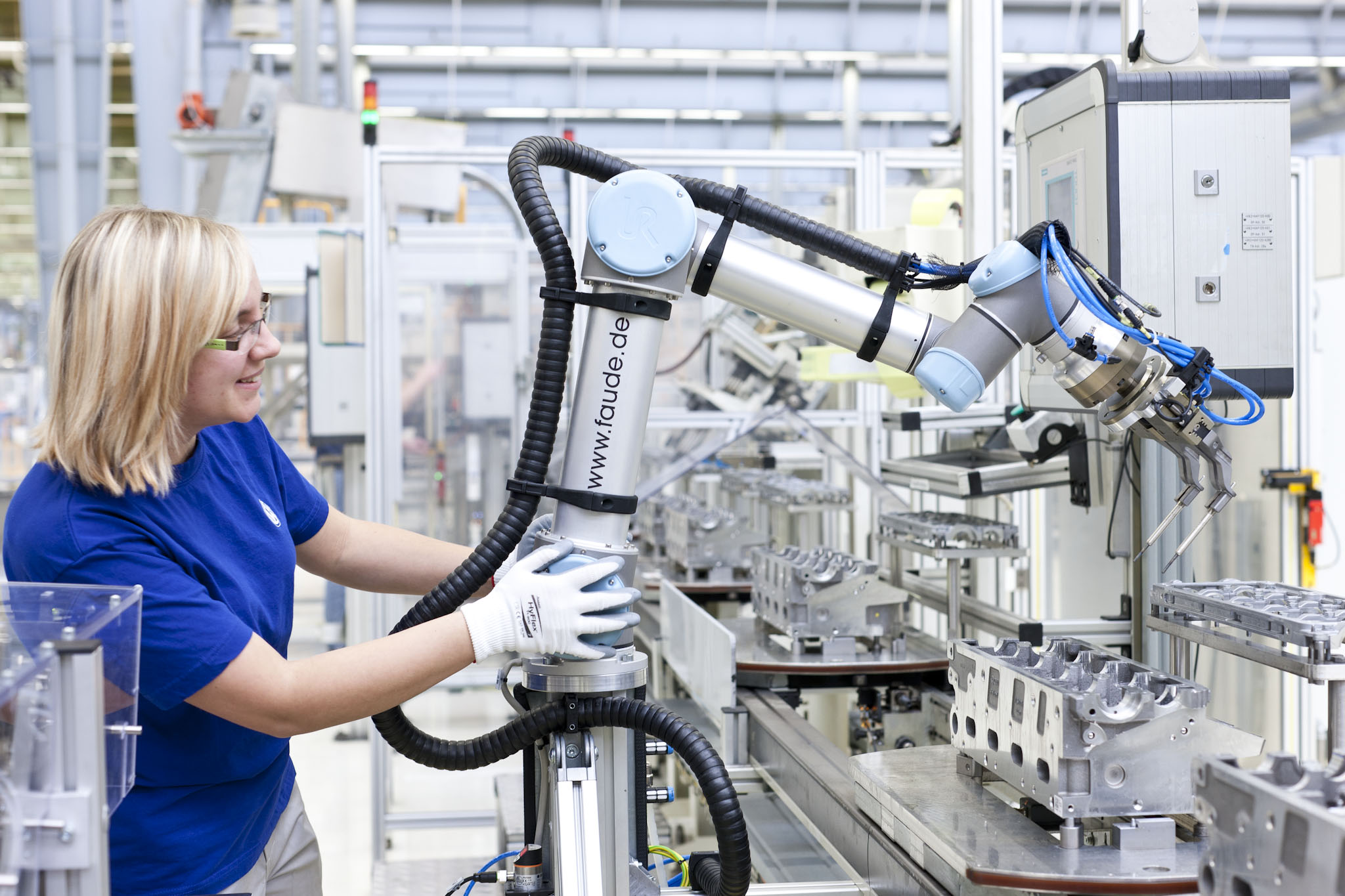 The car manufacturing group Volkswagen has integrated an industrial robotic arm from the Danish manufacturer Universal Robots into mass production at its engine production plant in Salzgitter, Germany. The lightweight robot UR5 is installed in the cylinder head assembly section, where it is responsible for handling delicate glow plugs. This is the first collaborative robot in use at Volkswagen worldwide. Due to its integrated safety mode, the six-axis robotic arm is able to collaborate directly with people without any guards, contributing significantly towards optimizing ergonomic working processes.

Odense, Denmark/Salzgitter, Germany, August 29, 2013: The Volkswagen plant in Salzgitter, with an area of 2,800,000 square meters, is one of the largest engine production plants in the world. Some 6,000 employees manufacture approximately 7,000 gas and diesel engines in over 370 variants there every day. The 3- to 16-cylinder engines are installed in the various models and brands of the Volkswagen group. The car manufacturer recently deployed a collaborative industrial robotic arm from the Danish manufacturer, Universal Robots, with people in the cylinder head assembly section of the plant for the purpose of inserting glow plugs into the cylinder heads.

By reason of its integrated safety mode (matching Standard EN ISO 10218), the industrial robot is able to work in the close vicinity of humans. It is equipped with a collaborative gripper, which the system integrator Faude Automatisierungstechnik has developed exclusively for Volkswagen and which meets the safety requirements of ISO/TS 15066, the specification standard for collaborating robots. Thus the robot was able to be integrated into the production line without additional protective housing.

“We would like to prevent long-term burdens on our employees in all areas of our company with an ergonomic workplace layout. By using robots without guards, they can work together hand in hand with the robot. In this way, the robot becomes a production assistant in manufacture and as such can release staff from ergonomically unfavorable work,” explains Jürgen Häfner, project manager at Volkswagen’s Salzgitter plant.

The project was implemented over a period of two years in close collaboration with Universal Robots’ distributor partner Faude Automatisierungstechnik. Together, the two employees in production, which were previously responsible for fitting the glow plugs onto the cylinder heads, should be relieved of a burden. Until now, they had to insert the glow plugs in a stooping posture into the scarcely visible cylinder head drill holes.

Hand in hand with a robot colleague

This step is now being taken over by the six-axis UR5 lightweight robot from Universal Robots. It carefully picks up the delicate glow plugs, which are provided by a specially designed separation system, and puts them into the hard-to-reach drill holes. An employee is then responsible for fixing the glow plugs and for insulating the cylinder head, which is required for the next step in production. Thanks to the direct joint working with the robot, which acts as an assistant, he can carry out these activities in an upright, healthy posture. In doing so, he is able to keep a constant watch over the process, so as to be able to intervene quickly when necessary.

“This was able to be accomplished mainly due to the result-oriented and constructive collaboration between Volkswagen and our partner Faude Automatisierungstechnik.”

UNIVERSAL ROBOTS A/S
Universal Robots is a Danish manufacturer of industrial robots. The company was founded in 2005 with the aim of making robotics accessible to all. The result is a lighter, more flexible and more environmentally-friendly robotic arm which has revolutionized the market for industrial robots. This was hitherto dominated by large, heavy and expensive robots. Universal Robots develops and sells robotic arms which easily automate monotonous and laborious processes in the industry and make them more effective. As a result, the production shop can use employees where they really create value. Universal Robots has approximately 100 employees. Entire development and production take place at the Odense site in Denmark.

Further information about Universal Robots is available at: http://www.universal-robots.com/GB/Press.aspx