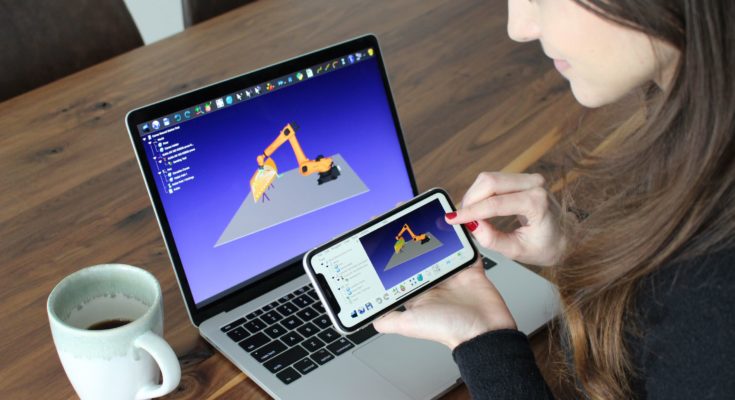 Mobile options for offline programming are few and far between. Not any more! With our latest version of RoboDK, you can program robots anywhere.

Robot programming has long been confined to desktop computers or high-end laptops. There aren’t many good mobile solutions for offline programming available.

Some offline programmers do have a “viewer” app for mobile devices… but what if you want to alter your programming or test something out when you were away from your robot workstation?

Until recently, that would have been impossible…

Now that has all changed!

The mobile version of RoboDK is now available for iPhone and Android.

Let’s take a look at what mobile offline programming can offer you.

Why Do We Need Mobile Offline Programming?

It’s so easy to just pick up the teach pendant, program a few points into the robot, and press go. Wouldn’t it be great if you could have the benefits of offline programming with the portability of a traditional teach pendant?

Mobile devices these days are as powerful as many computers, if not more powerful. They are as handy as a teach pendant and even more portable.

However, there are several benefits to offline programming with a mobile device.

Here are five of them:

Meet… The Android and iPhone Versions of RoboDK

The new version of RoboDK allows you to access the full power RoboDK but in the handy form of your Android or iOS device.

You can do almost everything in the mobile version of the app that you can do in the desktop version, including:

The new mobile version can be used with your normal RoboDK license, which you can add through the Help menu just as you do with the desktop version of the software.

How to Get the Most from RoboDK Mobile

The new mobile version is just as easy to use “out of the box” as the desktop version of RoboDK — in fact, it’s almost exactly the same program.

However, there are a few things that you can do to ensure that you are getting the most from the mobile version:

There are a lot of functionalities in RoboDK and small screen devices (e.g. smartphones) are not the best way to make use of these.

You will get the best experience from the mobile version when you use it with a large screen tablet device in landscape mode, e.g. an iPad or similar-sized Android device.

If you are familiar with the desktop version of RoboDK, you will know that it makes good use of the three mouse buttons and keyboard shortcuts. These are obviously not part of the mobile version.

To allow for the functionality that these bring, we have implemented multi-touch events in the app. For example, you can rotate the 3D view by touching and dragging around the screen with one finger. Zoom and Translation requires dragging the screen with 2 fingers.

3. Combine with the desktop version

It is most likely that you will want to use the mobile version of RoboDK in combination with the desktop version.

For example, you might use the desktop version whilst you are at the workstation in your office and the mobile version when you are walking around the factory.

Although some modern mobile devices are as powerful as a computer, most desktop and laptop computers are much more powerful than your average tablet.

Consider the specifications of your mobile device, particularly if you want to get the most from all of RoboDK’s more powerful features.

As with all versions of RoboDK, the best way to find out if the mobile version is right for you is to try it out!

You can download a free trial version on our website and install it to your Android or iOS device right away (remember you will have to grant permission to install the app as it has not been downloaded from Google Play or the Apple Store).

Offline Programming the PRIMA Laser Next 2141 for Laser Cutting

Tech Leader ZIMMER GROUP - the next generation of grippers