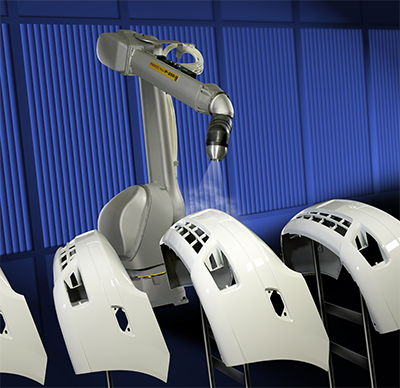 Company President, Mike Cicco remarked: “We have dedicated ourselves to 35 years of product innovation and manufacturing efficiencies to provide our customers with the highest quality paint robots that we design, assemble, and integrate here in the U.S. and export to customers around the world.  Throughout 2017, we will be taking a look at where we started, what we have achieved, and what our plans are for the future.”

In 1982, FANUC America produced its first NC Painter, a hydraulic paint robot using key components from parent company FANUC CORPORATION in Japan.  Now, 35 years later, FANUC America remains globally responsible for all paint robots and door openers of the FANUC robot lineup, which are sold to a diverse range of industries including automotive, aerospace, agricultural products, recreational vehicles and boats, furniture, appliance, and medical devices. In fact, FANUC America has supplied its U.S.-made paint robots to all of the top 15 global automakers ranked by the International Organization of Motor Vehicle Manufacturers (OICA).

All of FANUC America’s new paint robots are ZDT-ready, which means they can monitor a variety of functions including paint canisters, spray applicators, drive health and paint process regulators.  In addition, ZDT provides maintenance reminders to notify customers to inspect or replace worn items. Currently, there are over 800 paint robots now using ZDT analytics with additional robots connected to the cloud each month.

FANUC America’s paint robots are ideal for automating applications that are ergonomically challenging, hazardous and labor intensive.  “We’re seeing a significant increase in paint robot sales to non-automotive customers both domestically and abroad,” added Karr.  “These customers want to improve quality and throughput while minimizing their assembly workers’ exposure to hazardous environments, similar to what automakers looked to do back in 1982.”

FANUC America recently introduced its latest paint robot, the P-350iA/45, which will demonstrate sanding, washing and drying an aircraft fuselage at the 2017 Automate Show in Chicago, booth #1625.

The new P-350iA/45 robot is designed for a variety of applications including painting, coating, sanding, and washing, it offers a flexible six-axis design and is Class 1, Division 1 approved for operation in hazardous environments.

FANUC embraces a culture of “Service First” which means that customer service is our highest priority. That commitment includes lifetime maintenance for all FANUC products for as long as our customers use them in production.

The Robotmakers – Yesterday, Today and Tomorrow