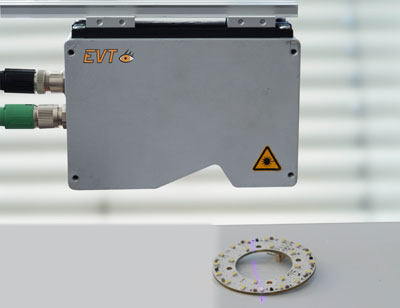 The EyeVision software by EVT now also supports a 3D laser triangulation sensor with blue laser. The new EyeScan AT 3D scanner is therefore better suitable for the scanning of metal or metallic surfaces.

The blue laser has the laws of physics on its side because it has a shorter wavelength than a red laser. As a result, a blue laser delivers improved scanning results with higher resolution and up to a 50-percent reduction in data noise.

Due to the shorter wavelength the laser speckle pattern is smaller, so that a sharper depth image is generated. The blue laser has more effects when scanning metal, because a blue laser is narrower and finer than a red laser line.

Thanks to 20.000 profiles per second and the new blue laser, even complex component parts and surfaces can be captured with high accuracy. The extremely fast scans are possible due to the short exposure time.

Additionally the EyeScan AT 3D Blue has a high quality Schleimpflug optic, and therefore even with a big lens and short exposure time a sharp image is possible. And also the lens is of such quality, that there is no lens correction necessary.

Also what makes the EyeScan AT 3D Blue fast is the laser class 3 and the preprocessing of data with a FPGA inside the scanner.

And the high dynamic range with 3time exposure, makes it possible that dark and bright objects can be inspected in one scan, without a decrease in speed.

Parameters of 3D Sensing Techniques in a Nutshell