In 2008, the Colleges of Computing and Engineering at Georgia Tech created the nation’s first truly interdisciplinary doctoral degree in robotics. The program was developed through Georgia Tech’s Center for Robotics and Intelligent Machines.

Executive Director Selected at Institute for Robotics and Intelligent Machines 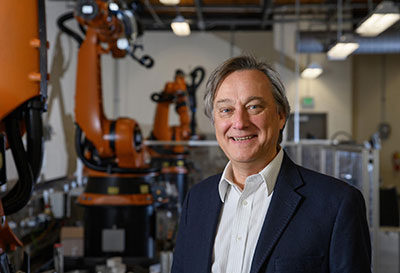 Before joining Georgia Tech in January 2018, he was a professor of electrical and computer engineering at the University of Illinois at Urbana-Champaign. Hutchinson holds a bachelor of science, master of science and Ph.D. in electrical engineering from Purdue University.

“Seth is internationally known for his work in robotics as evidenced by his more than 200 publications, his editor-in-chief role of the IEEE Transactions on Robotics and his recent selection as president-elect of the IEEE Robotics and Automation Society,” said Chaouki Abdallah, Georgia Tech’s executive vice president for research. “I am pleased that he will be the new executive director of Georgia Tech’s Institute for Robotics and Intelligent Machines, and I look forward to working with him toward the goal of making Georgia Tech the leader in robotics, autonomy and manufacturing.”

“The robotics research happening here at Georgia Tech is among the best in the world, from actuators to high-level reasoning,” he said. “I honestly cannot think of a place I’d rather be right now than here, working with this group of people.”

At Georgia Tech, IRIM serves as an umbrella under which robotics researchers, educators and students from across campus can come together to advance the many high-powered and diverse robotics activities.

IRIM’s mission is to create new and exciting opportunities for faculty collaboration; educate the next generation of robotics experts, entrepreneurs, and academic leaders; and partner with industry and government to pursue truly transformative robotics research. IRIM serves more than 90 faculty members, 180 graduate students and 40 robotics labs. The robotics program at Georgia Tech attracts more than $60 million in research annually.