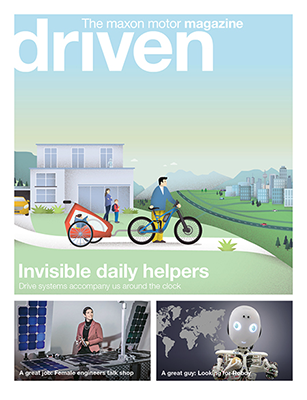 driven magazine reveals where they are commonly used.

Precision drive systems can be found in the home, in vehicles, and at work, making our lives simpler and safer. The current issue of driven, the maxon motor magazine, provides interesting insights into the world of drive technology. It also goes in search of an old friend.

Most people have nothing to do with drive systems in their work. However, without being aware of it, they come across them everywhere: in cars, buses, elevators, and even within their own four walls. Drive systems are invisible to ordinary people, but they play an important role in our lives. driven, the maxon motor magazine, spends a day with a family and discovers some exciting uses for them.

What's Roboy doing these days?
driven readers can find out what the popular robot known as Roboy has been doing over the last few years and what the future holds for him. We also take a look at the hot topic of women in technical careers. Two female engineers from maxon describe their experiences in a male-dominated world and give young women some useful tips.

driven focuses on drive technology and is published twice per year in three languages. All issues are also available on the driven app, which can be downloaded from the App Store and Google Play Store.