Edmund Optics® (EO) is a leading producer of optics, imaging and photonics technology for R&D, electronics, semiconductor, pharmaceutical, biomedical and military markets around the globe. 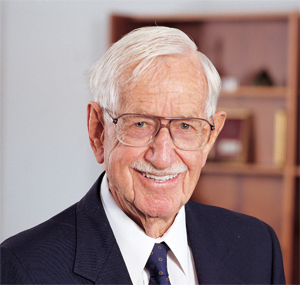 Norman W. Edmund was known throughout the world as the creator and entrepreneurial spirit behind Edmund Scientific, which later evolved into Edmund Optics. He is credited with inspiring multiple generations of young talent to become interested in science and engineering through his thought-provoking catalog of optics, scientific experiments, and learning tools. He was known to read as many as 200 periodicals per month in search of clever ideas, new products, and innovative applications for his unique lenses.

Mr. Edmund spent his childhood in Camden, New Jersey, reading extensively, working as a newspaper boy, helping others as a Boy Scout, and earning the "most studious" award in his high school. He went on to graduate from the Wharton School at the University of Pennsylvania in 1939, again receiving a similar award for "Most Outstanding for the Combination of Scholarship and Extra-Curricular Activities."

While recuperating from tuberculosis immediately following graduation, Norman Edmund met and soon married his nurse, Pauline Barna. Back to health at the age of 25, he began cultivating an interest in optics and in 1942, during WWII, he started a mail order business, known as Edmund Salvage Corporation, selling kits of lenses. His office was a card table in their family home, and his wife served as the VP of Operations, a position she would hold for the next 30 years. He added prisms, war surplus optical items, telescopes and scientific items, many of which he sourced from the Franklin Arsenal in Philadelphia. Before long, thousands of experimentally inclined individuals and major research labs and universities were buying from his newly expanded optics company, Edmund Scientific, Inc.

In 1948, Edmund completed construction on the Barrington, New Jersey, office, dedicated to both his company and his mission -- to inspire subsequent generations of optical scientists and engineers by offering the best and most comprehensive selection of optics in the world. By the beginning of the Korean War, Edmund had accumulated approximately $60 million worth of US surplus optics. After his company responded to a U.S. Army need for optical equipment during this war, an army representative remarked, "Gee, you have more optics than the Army!"

During the 1970s Edmund focused his company away from surplus optics and into the manufacture and distribution of commercial quality optics and components. In 1975, Norman retired, passing the leadership to his son, Robert Edmund, the current CEO of Edmund Optics, Inc. In his retirement he enjoyed warm Florida winters and time on his fishing boat - the beloved Pickled Herring. He focused much of his later years on researching and publishing books about the Scientific Method, where he is credited with creating an advanced model for educators to teach the scientific method to future generations.

Many of the staff of Edmund Optics fondly recall, throughout the years, Norman Edmund's friendly greetings as he took his routine morning walk through the halls of EO. He thoroughly enjoyed working with and meeting the staff.

Norman Edmund leaves behind two children, Robert M. Edmund and Joan E. Husted, as well as six grandchildren and 13 great-grandchildren. He is remembered by all for his generosity, love of science, and curious mind.

To learn more about Norman Edmund and the 70 year evolution of his company, please visit the EO 70th Anniversary Timeline at www.edmundoptics.com/70-years.