World’s fastest, most precise in their class 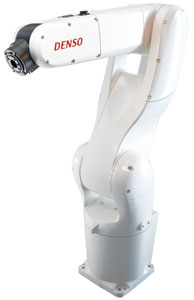 The new VS robots are also extremely flexible, with an even more compact design than previous models, including ultraslim arms to facilitate integration and a new optional bottom-side cable connection that saves valuable floor space. The robots can be mounted on the floor, ceiling or wall with no special hardware needed.

“Our new VS-Series robots have received a tremendous reception from the marketplace,” said Peter Cavallo, robotics sales manager, DENSO Sales California. “The new cleanroom models will let us extend the benefits of these robots into many new application areas.”

More information about the new VS-Series cleanroom robots is available on the DENSO Robotics website at densorobotics.com/products-vs-6axis-new.php.

DENSO is the world’s largest user of small assembly robots, with more than 16,000 DENSO robots designed and used in its own manufacturing facilities. More than 60,000 DENSO robots are used in other companies worldwide.

DENSO offers a wide range of high-speed, four-, five- and six-axis industrial robots, with payloads up to 20 kg, reaches from 350 to 1,300 mm and repeatability to within ±0.015 mm. DENSO’s compact, space-saving design facilitates integration, while a high maximum moment of inertia allows a wide variety of end effectors and applications. Standard, dust- and mistproof, dust- and waterproof, cleanroom and aseptic models are available. Programming software, controllers and teaching pendants are also offered. ANSI and CE compliance enables global deployment. UL-listed models are available for the U.S. and Canada.

DENSO Corporation, headquartered in Kariya, Aichi prefecture, Japan, is a leading global automotive supplier of advanced technology, systems and components in the areas of thermal, powertrain control, electric, electronics and information and safety. Its customers include all the world's major carmakers. Worldwide, the company has more than 200 subsidiaries and affiliates in 35 countries and regions (including Japan) and employs approximately 120,000 people. Consolidated global sales for the fiscal year ending March 31, 2012, totaled US$38.4 billion. Last fiscal year, DENSO spent 9.5 percent of its global consolidated sales on research and development. DENSO common stock is traded on the Tokyo and Nagoya stock exchanges.

In North America, DENSO employs more than 13,000 people with consolidated sales totaling US$6.2 billion for the fiscal year ending March 31, 2012.