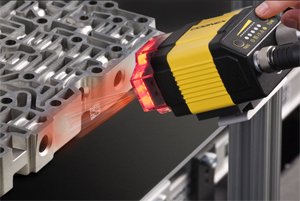 Cognex Corporation (NASDAQ: CGNX) will highlight its most advanced fixed-mount industrial ID reader ever created — the DataMan® 300 in Booth #2012 at the upcoming Expo Pack México, scheduled to take place June 26-29, 2012 at the Centro Banamex in Mexico City. The DataMan 300 is designed to handle the most difficult ID code-reading applications on even the highest speed lines. These new readers dramatically increase barcode read rates and speed with a new 1DMax+™ algorithm, which incorporates groundbreaking new “Hotbars™” technology.  For 2-D matrix and difficult-to-read DPM (Direct Part Mark) codes, reading performance also has been significantly improved from a major upgrade of 2DMax™ to the 2DMax+™ algorithm. With the DataMan 300, set up and deployment is even easier than before, with modular, controllable lighting options and a unique intelligent tuning system.

“It just reads. Period. The DataMan 300 can read any code we challenge it with,” said Carl Gerst, Vice resident and Business Unit Manager, ID Products. “Besides unprecedented read rates, the DataMan 300 reader is our easiest to install and maintain, saving our customers time and money — two things they need to allocate to other areas of their operation in order to be successful.”

In another leap, the DataMan 300 series offers the flexibility of integrated and controllable modular lighting and optics. Users can purchase just one model and choose the appropriate lens for their required working distance and field of view. The controllable, field changeable lighting modules allow users to create the best possible lighting for their part, ensuring optimal read rates.

Because 2-D DPM code reading is inherently difficult due to the normal manufacturing processes that parts undergo, the DataMan 300 adds a new tuning feature to help form the best possible image of each part. This intelligent tuning technology automates the settings of the integrated lighting to find the optimal light setup for the part making the DataMan 300, the most advanced DPM reader on the market.

For more information about the DataMan 300 series of fixed-mount ID scanners, visit www.cognex.com/300.

About Cognex
Cognex Corporation designs, develops, manufactures and markets machine vision and industrial ID systems, or devices that can "see."  Cognex vision and ID systems are used around the world for a wide range of inspection, identification and guidance applications throughout the manufacturing and distribution process.  Cognex is the world's leader in the machine vision and industrial ID industries, having shipped more than 700,000 systems, representing over $3 billion in cumulative revenue, since the company's founding in 1981.  Headquartered in Natick, Massachusetts, USA, Cognex has regional offices and distributors located throughout North America, Europe, Asia, Japan and Latin America.