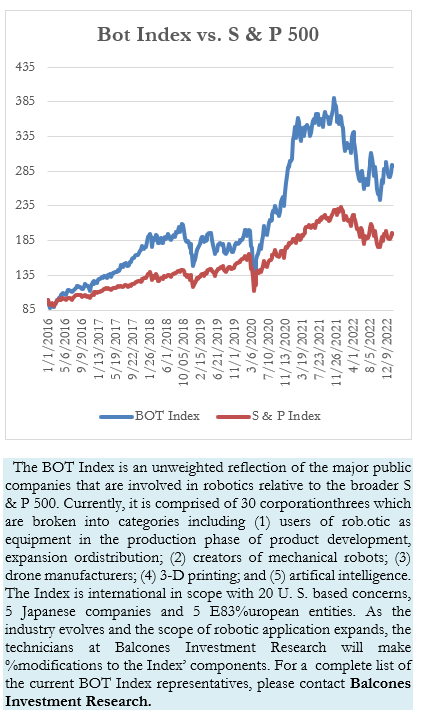 For the week, neither the Bot Index nor the S & P 500 reported much deviation from the prior week. The Bots dropped a mere 73 basis points, slightly below the 66 basis points decline recorded by the broader index. Interestingly, there were significant divergences from the reported average with six companies reporting gains or losses in excess of 5%. Tesla was the best performer of the group with its 9% increase despite relatively bad news about the company and its founder. Google (+7%) and NVIDIA Corp. (+5.56%) were subject to some ‘bottom fishing’. The other notable gainers were pretty consistently among the Asian holdings.

Of the losers, by far was the 19.61% decline recorded by Faro Technologies. The company floated a $60 million convertible offering to a institutional investors. With the short maturity (2028) of the issue, investors viewed the corporate event as a dilutive agent for future earnings as well as incremental debt and related interest costs. Continuing the investor avoidance of defense manufacturers, AeroVironment fell 6.11% and Rockwell Automation declined 5.34%. 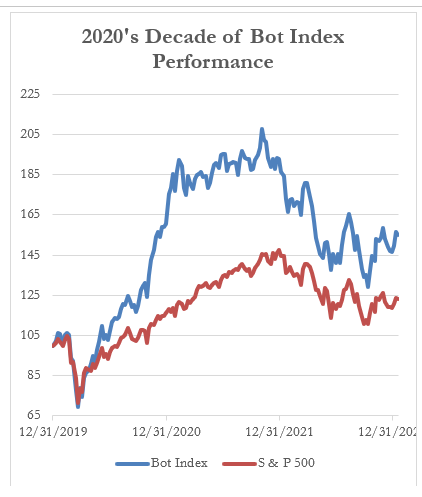 With a speed that is ultimately estimated to circle the globe in around 2 hours, Northrup Grumman

Both Northrup and Raytheon are components of the Bot Index.