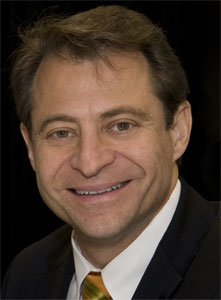 Dr. Diamandis is the Chairman and CEO of the X PRIZE Foundation, a non-profit focused on designing and launching large incentive prizes to drive radical breakthroughs for the benefit of humanity. Best known for the $10,000,000 Ansari X PRIZE for private spaceflight, the Foundation is now launching prizes in four groups: Exploration, Life Sciences, Energy & Environment, and Education/Global Development. Today the X PRIZE has three active prizes: The $10M Archon X PRIZE for Genomics, the $30M Google Lunar X PRIZE and the $10M Progressive Automotive X PRIZE.

Diamandis is also international leader in the commercial space arena, having founded and run many of the leading entrepreneurial companies in this sector. Diamandis serves as co-Founder & Managing Director of Space Adventures, the only company to have brokered the launches of private citizens to the International Space Station. He is co-Founder & CEO of Zero Gravity Corporation, a commercial space company developing private, FAA-certified parabolic flight utilizing a Boeing 727-200 aircraft. He is the Chairman & co-founder of the Rocket Racing League.

In 2008, he co-Founded the Singularity University, where he serves as Vice-Chancellor and Chairman. In 1987, Diamandis co-founded the International Space University and the Rocket Racing League where he served as the University’s first managing director. Prior to ISU, Diamandis served as Chairman of Students for the Exploration and Development of Space (SEDS) an organization he founded at MIT in 1980.

He is the winner of the 2007 Arthur C. Clarke Award for Innovation, the 2006 (inaugural) Heinlein Award, the 2006 Lindbergh Award, the 2006 Wired RAVE Award, the 2006 Neil Armstrong Award for Aerospace Achievement and Leadership, the Konstantine Tsiolkovsky Award, twice the winner of the Aviation & Space Technology Laurel, and the 2003 World Technology Award for Space. In 8th grade, while living in New York, Dr. Diamandis won first place in the Estes rocket design contest. Diamandis’ mission is to open the space frontier for humanity. His personal motto is: “The best way to predict the future is to create it yourself!”

Automate Moves to Motown in 2021

The big spring cleaning in space

Extending the Barriers of Power Density