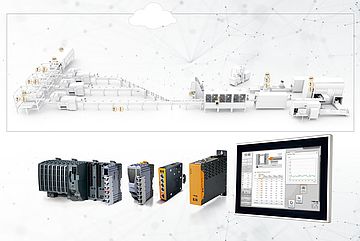 With a standardized OPC UA over TSN network, the days when OEMs had to offer an array of machine variants with different control and bus systems are over. From a multitude of interfaces, only a single one remains – an interface that exchanges standardized data between all the nodes in the network. Machinery and plants become substantially easier to develop and operate.

More room for innovation
Configuration of OPC UA over TSN devices and the network itself, as well as assignment of access rights, is all handled in B&R's Automation Studio engineering software. Not only does that allow the configuration to take place automatically, the ready-made software blocks also minimize the amount of programming involved in developing modular machines. You can connect drives, controllers and other devices from different manufacturers without any additional overhead. Rather than writing code, all that remains for the developer to do is set a few parameters.

18x faster
OPC UA over TSN networks are capable of plug-and-produce operation and are easy to configure and administer. Network stations will communicate up to 18 times faster than with any previously available protocol. Together with the new B&R products, this opens up new possibilities in areas such as tightly synchronized motion and control applications.

The fusion of IT and OT
OPC UA enables seamless, transparent communication from the sensor to the cloud. The TSN extension enables the protocol to converge IT and OT into a unified network, fulfilling a key requirement of all Industrial IoT applications. The technology supports networks comprising tens of thousands of nodes and benefits from bandwidth extensions to the Ethernet standard. Even large volumes of data – such as those used for intelligent condition monitoring and predictive maintenance – can be handled with ease.

Getting Started with RTX64

Homing Once is Enough