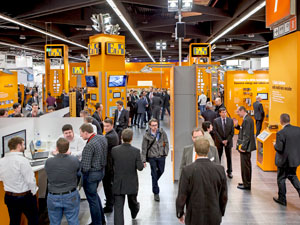 With this advancement, B&R is extending the use of reACTION technology into the area of safety-critical applications. This technology makes it possible for time-critical subprocesses to be executed directly in the I/O modules, which enables drastic reductions in response times. What's more, no expensive special hardware is needed to use reACTION technology, and programming is just as easy as it is for conventional control solutions.

Another technology developed by B&R also saves an impressive amount of time: mapp technology, with its networked and flexible function blocks, makes it possible to reduce the time needed to develop application software by an average of 67 percent! The 70 mapp components presented in the fall of 2014 generated quite a buzz at the time. Now, B&R is planning to introduce an additional 30 functions at the Hannover Messe.

Open and flexible
"Smart factories require additional flexibility across all plant systems, which goes hand in hand with the digitalization of information exchanged between all networked equipment," explains Markus Sandhöfner, general manager of B&R Germany. "The Scalability+ concept allows our customers to successfully implement these changes quickly and easily." Maximum flexibility and openness have been buzzwords for automation solutions at B&R for decades, laying the foundation for the 100% networked production facilities of the future. The end result is the utilization of fewer resources, increased productivity and the possibility of manufacturing individual products in series production runs.

Market leaders in India put their trust in B&R
This year's partner country of the Hannover Messe is India. B&R has been active on the subcontinent since 1998 with a subsidiary that has since grown to five offices. The company has made a name for itself in Indian industrial circles as a supplier of innovative and high-quality products. Market leaders in the Indian plastics, pharmaceuticals, textiles and automotive industries put their trust in B&R.

"India is working hard to join the ranks of the industrialized countries, which means that rapid progress in the production and services sector is essential," explains P.V. Sivaram, general manager of B&R India. In order to handle the rapidly growing domestic market and aid expansion, India is not only planning massive investments in infrastructure, but also substantially upgrading existing production capacity. "The market for automation technology is expected to grow exponentially," says Sivaram. "B&R India is ready to meet these needs."

Blog Post: When Is Outsourcing Engineering Right for You?