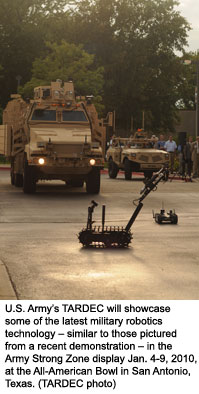 For 10 years, the U.S. Army All-American Bowl has served as the preeminent launching pad for America’s future college and NFL stars. The Army Strong Zone is a 129,000 square-foot interactive display area featuring some of the Army’s elite technology and assets. Army Soldiers are also on-site to provide visitors with a glimpse into Army life and the many options and opportunities available through military service.

“The All-American Bowl continues to be a springboard for a number of outstanding student athletes, and we are proud to showcase TARDEC technologies to both participants and fans in San Antonio,” said Dr. Jim Overholt, TARDEC’s Joint Center for Robotics director. “TARDEC is highlighting technologies that are at the forefront of our energy initiatives and others that are doing the dull, dirty or dangerous work we don’t want our Soldiers performing.” Overholt is scheduled to be on location to answer questions about Army robotics research and development in the areas of tele-operated and autonomous unmanned ground vehicle systems.

TARDEC – the U.S. Army’s robotics center of gravity – will highlight the research being pursued in core robotics technology for small, unmanned ground vehicles (UGVs). The goal of robotics research is to enhance Soldier situational awareness allowing Soldiers to complete their missions without unduly exposing themselves to enemy attacks.

TARDEC’s Army Strong Zone display will feature a variety of UGVs including:

ABOUT U.S. ARMY ALL-AMERICAN BOWL
Adrian Peterson, Reggie Bush, Mark Sanchez, Tim Tebow and Terrelle Pryor all made their national debuts as U.S. Army All-Americans. Last year the U.S. Army All-American Bowl drew more than 32,000 fans to the game at the Alamodome along with being the most watched sporting event on television of the weekend, after the NFL Playoffs. Last spring, eight All-American Bowl alumni were selected in the first round of the NFL draft. In addition, U.S. Army All-American Marching Band members selected from across the country have marched in many top Drum Corps International and Winter Guard International groups, as well as participating in high level state ensembles. The state of Michigan was represented by nine high school musicians at last year’s game.

For more information on the U.S. Army All-American Bowl and its related events, visit www.usarmyallamericanbowl.com or www.goarmy.com/events/aab.

ABOUT TARDEC
Headquartered at the Detroit Arsenal in Warren, MI, TARDEC is the Nation's laboratory for advanced military automotive technology and serves as the Ground Systems Integrator for all DOD manned and unmanned ground vehicle systems. With roots dating back to the World War II era, TARDEC is a full life-cycle, systems engineering support provider-of-first-choice for all DOD ground combat and combat support weapons, equipment and vehicle systems. TARDEC develops and integrates the right technology solutions to improve Current Force effectiveness and provide superior capabilities for Future Force integration. TARDEC’s technical, scientific and engineering staff lead cutting-edge research and development in Ground Systems Survivability; Power and Mobility; Intelligent Ground Systems; Force Projection; and Vehicle Electronics and Architecture.
For more information about TARDEC, visit us at http://tardec.army.mil.