At Solomon our mission is to make possible for robots and machines to perform increasingly complex jobs required of today´s manufacturing industries by providing them with human-like vision and recognition capabilities. Our products, existing or under development, blends advanced 3D vision and latest deep learning technologies, tackling tasks previously thought impossible or impractical for robots and machines to perform. As AI rapidly evolves, we believe the potential to raise productivity in factories and other walks of life is unlimited. We look forward to work with partners worldwide and hear from you as we embark on this exciting journey.

AI-Powered 3D Vision is the Key to Smart Factories

Manufacturers around the world are gearing up to adopt Industry 4.0. Successful implementation hinges on companies’ ability to manage factories with smart machinery and IT systems connected by advanced software. Robots are key parts of the equation. With few exceptions robots in most factories today are used to perform monotonous tasks, as they come without the intrinsic cognitive capabilities of human operators in taking on tasks requiring sensory and intelligence. That’s starting to change though with transformative technologies such as artificial intelligence and advanced 3D vision systems, both are made possible by the rapid increase in computing power. By harnessing these powerful new technologies Solomon’s suite of AI-based machine vision solutions can significantly enhance productivity of robots by making them more ‘intelligent’ and flexible. 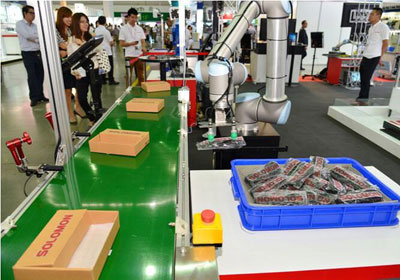 Solomon’s suite of AI-based machine vision solutions can significantly enhance productivity of robots by making them more ‘intelligent’ and flexible.

Smart bin picking technology
Known as ‘holy grail’ of robotic automation, random bin picking is the task of robot picking workpieces heaped up in a bin. A seemingly simple task for humans to perform is not quite as easy for robots. There are three essential steps a 3D vision system has to master for a robot to complete the job - see the objects, know where they are, and guide robot to a specific angle and position to pick them. By integrating seamlessly an advanced scanner hardware, 3D processing software, and state-of-art AI technologies, Solomon’s AccuPick 3D system is able to perform bin picking with high recognition rate and ease of use.

AccuPick’s advanced software segments and recognizes workpieces represented by 3D point cloud map, with each workpiece’s position and pose quickly calculated. What separates AccuPick from conventional 3D system is its ability to recognize complex shapes objects far more effectively and efficiently. This is possible through the use of advanced deep learning, which can also reduce up to 70% of time spent on ‘teaching’ the software to recognize the workpieces regardless their positions and orientations.

Once the picking position and pose are identified, a robot must be able to move toward the desired location in an optimal path and avoid colliding with the bin. AccuPick’s motion planning module is specifically targeted for applications requiring robot arms to maneuver inside of an outsized bin.

AccuPick has been successfully applied in various industries including automotive components, electronics, food packaging, machine tending, and warehouse de-palletization. AccuPick offers far more intelligence and flexibility with its ability to recognize complex picking environment, such as picking and sorting multiple objects, or determining the right orientations of occluded workpieces.

AccuPick is compatible with major robot brands, including Universal Robots (UR+ certified), Fanuc, Staubli, Yaskawa, Kuka, ABB, and others. 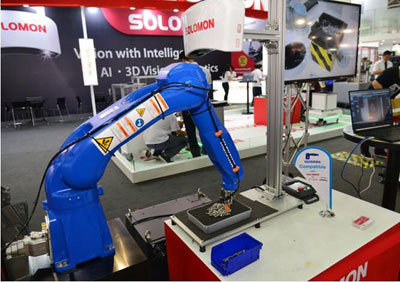 Vision Guided Robot
In production lines fixing a workpiece in a rather precise position is often difficult or time consuming because labor placement can’t be accurate enough for robot to perform the requisite tasks, such as sealing, assembly, welding, or inspection. Quite often executing these tasks still requires labors carrying them out. The alternative is to design mechanical fixtures catered to each workpiece so a robot can perform the task after workpiece’s position is fixed mechanically, the disadvantages of this mechanical approach are high costs associated to design these fixtures, the lack of flexibility if a part is no longer produced, and the changeover time required in the production lines.

Solomon’s 3D vision guided robot solution, Solmotion, takes complexity out of these seemingly mundane tasks as it recognizes unique features on a workpiece so it’s able to identify the three dimensional position and orientation of the workpiece even if it is placed imprecisely. All it takes is for the Solscan 3D scanner to take a snapshot of the workpiece and the software immediately matches and calculates the required routes for robot to move along. Applications include sealing of automotive parts, gluing of footwear parts, quality inspection of metal or plastic injection objects, welding of motors, to name a few.

AI-based vision inspection
Rapid progresses brought by AI are starting to change the way machine vision problems are approached. In industrial setting, defects and features with irregular patterns such as hard-to-define scratches, stains, cracks and many other types of flaws have been difficult for conventional rule-based methods to inspect, but can now be identified with far more ease using neural networks. Solvision, Solomon’s AI-based machine vision software, is well suited to solve inspection problems of this nature. Like the way humans visually learn how to identify objects and features, deep learning requires no tedious writing of codes to inspect each defect type. All it takes is a few sample to label the defect types for machines to learn, simplifying inspections tasks and saving significant amount of engineers’ time to write the programs. Another advantage of Solvision is its seamless integration with different robots, six-axis or SCARA, so objects inspected can be automatically separated accordingly. Solvision can also be extended to inspect objects with three dimensions by leveraging Solomon’s 3D Solscan scanner and software.

FASTSUITE for JENOPTIK – The Perfect Software for 3D Laser Systems