Acme Manufacturing is one of the earliest pioneers in surface finishing automation. Since 1910, the company has remained family-owned and operated by four generations of the Carlson family. The family has brought a steady sequence of innovations to over 20 industries on a global scale. As the premier robotic integrator in the surface finishing space, Acme has built a family culture with values that continue to drive our technology-focused mindset. 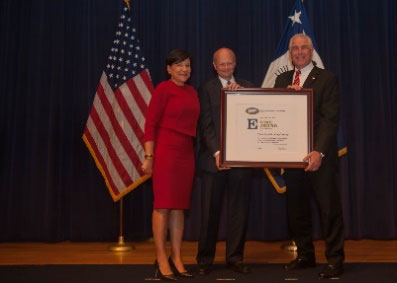 “Acme has demonstrated a sustained commitment to export expansion. The “E Star” Awards Committee was very impressed with Acme’s more than 450% increase in export sales from 2012-2015. The Company’s collaboration with other U.S. manufacturers to enter international markets was also particularly notable. Acme’s achievements have undoubtedly contributed to national export expansion efforts that support the U.S. economy and create American jobs”, said Secretary Pritzker in her congratulatory letter to the Company announcing its selection as an award recipient.

Acme Manufacturing Company based in Auburn Hills, Michigan, U.S.A., is the world leader in the design and manufacture of integrated robotic automation for polishing, buffing, deburring and grinding systems. Acme is a fourth generation family owned business started in 1910.

“Exporting continues to be the foundation of our sales growth, and we are honored to receive the “E Star” Award,” said Fritz Carlson, President of Acme. “When we first began exporting in 1950, export sales accounted for five percent of our total sales. During the past five years, export sales have grown to nearly 70 percent of our total sales, enabling us to sustain jobs and substantially expand our work force.”

In 1961, President Kennedy signed an executive order reviving the World War II “E” symbol of excellence to honor and provide recognition to America's exporters. Today, Secretary Pritzker honored 123 U.S. companies with the President’s “E” Award for their outstanding work to reduce barriers to foreign markets and to open the door to more trade around the world.

U.S. companies are nominated for the “E” Awards through the Department of Commerce’s U.S. Commercial Service office network, located within the Department’s International Trade Administration, with offices in 108 U.S. cities and more than 70 countries. Record years of successive export growth and an applicant’s demonstration of an innovative international marketing plan that led to the increase in exports is a significant factor in selecting the winners.

Get Production Back Up To Speed