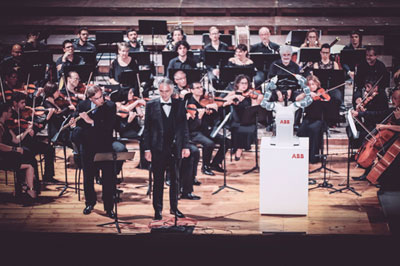 YuMi, the world's first truly collaborative dual-arm robot, made its debut at the opera on Tuesday (Sept. 12) by conducting Italian tenor Andrea Bocelli and the Lucca Philharmonic Orchestra at the Teatro Verdi in Pisa.

YuMi, which is manufactured by Swiss technology pioneer ABB, was invited to the stage by Mr. Bocelli, who performed the famous aria "La Donna è Mobile" from Verdi's Rigoletto. YuMi also conducted works of Puccini and Mascagni during its first night at the opera in front of a sold-out Teatro. Among the guests was ABB CEO Ulrich Spiesshofer, under whose leadership YuMi was developed. The unique demonstration showed what can happen when advanced robotics meets the arts.

ABB to exhibit its latest robotic innovations at Automate 2022