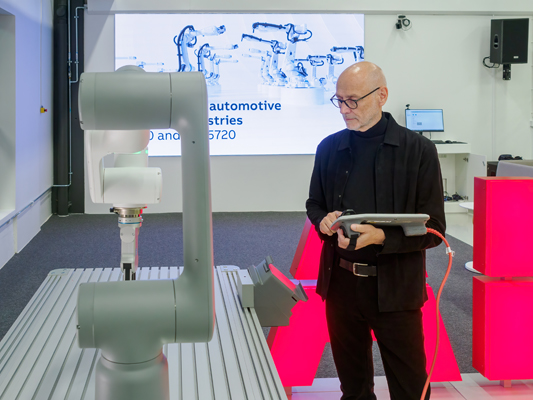 at the ISR (International Symposium on Robotics) event in Munich Germany, the prestigious Engelberger Robotics Award for Leadership. Bertil is widely recognized as the ‘father’ of RobotStudio®, ABB’s software platform that has revolutionized the way robot systems are designed and tested. He was instrumental in the adoption of virtual and augmented reality technologies, enabling system integrators and end manufacturers to visualize how a robot would work in the factory floor, without stopping production. RobotStudio® is an example of how users can increase productivity and at the same time contribute to sustainability by reducing the risk of waste.

Bertil, who joined ABB as early as 1976, has been part of the robotics industry since its genesis.  He was part of the small team that developed the world’s first microprocessor controlled all-electric robot, and in the 1980s, was instrumental in developing the software tools to create “digital replicas” of real manufacturing systems, which led to the birth of RobotStudio.

“I would like to congratulate Bertil for his huge contribution to furthering the field of Robotics,” said Marc Segura, President of Robotics, ABB. “Through his forward-thinking vision and leadership, he has been instrumental in the digitalization of automated solutions. By leading the development of RobotStudio® - one of the most used programming and simulation software solutions in the world – Bertil has radically transformed the field of robotics, increasing productivity in automated solutions. I take this opportunity to thank him for this extraordinary achievement.” added Segura.

At the 54th ISR gala dinner that once again took place in conjunction with the Automatica trade fair, Bertil accepted his award as a thought leader in the robotics industry, and more recently also 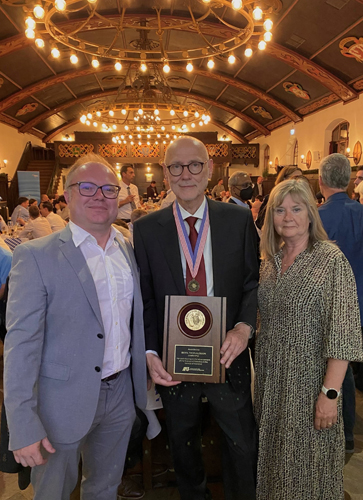 “It is an honor to receive the Joseph F. Engelberger award and to be a part of the prestigious “robotics hall of fame,” said Bertil Thorvaldsson. “Augmented reality and the metaverse were science fiction when I started my career in robotics, but now they play an integral part in automation every day. It has been fascinating to be a part of this journey, and I am proud of the role RobotStudio® has played over the years. Today is a tipping point - where the integration of AI and software can radically expand the horizons of robotics and automation. I look forward to the next exciting chapter."

ABB Robotics & Discrete Automation is a pioneer in robotics, machine automation and digital services, providing innovative solutions for a diverse range of industries, from automotive to electronics to logistics. As one of the world’s leading robotics and machine automation suppliers, we have shipped more than 500,000 robot solutions. We help our customers of all sizes to increase productivity, flexibility and simplicity and to improve output quality. We support their transition towards the connected and collaborative factory of the future. ABB Robotics & Discrete Automation employs more than 11,000 people at over 100 locations in more than 53 countries. go.abb/robotics

First Autonomous Mobile Robot Conference Sponsored by A3 and RIA Set for September 17 in Louisville, Kentucky