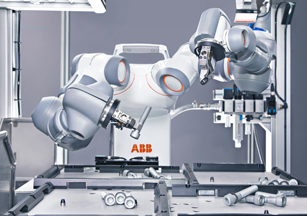 YuMi is a human-friendly dual arm robot designed for a new era of automation, for example in small parts assembly, where people and robots work hand-in-hand on the same tasks. YuMi is short for ‘you and me,’ working together.

YuMi has been developed to meet the flexible and agile production needs of the consumer electronics industry in the first instance. It will increasingly be rolled out to cover other market sectors. YuMi is a collaborative, dual arm assembly solution with the ability to feel and see. The robot’s soft, padded dual arms, combined with innovative force-sensing technology ensure the safety of YuMi’s human co-workers. Safety is built into the functionality of the robot itself so that it can work cage-free.

Capable of handling everything from the delicate and precise parts of a mechanical wristwatch to the components used in mobile phones, tablets and desktop PCs, YuMi performs with accuracy so great it can thread a needle.

“YuMi is going to change many of mankind’s assumptions about manufacturing and industrial processes,” said Pekka Tiitinen, head of the Discrete Automation and Motion division, “Yumi will open endless possibilities. We are at the start of a very exciting new era for industrial automation.”

Per Vegard Nerseth, head of ABB’s global Robotics business, added: “Naming this robot YuMi reflects the true spirit of human - machine collaboration – humans and robots sharing tasks side by side in ways we could never have imagined previously.”

YuMi will be commercially launched on April 13, 2015, at the Hannover Messe in Germany, the world’s largest industrial technology fair.

ABB is a leader in power and automation technologies that enable utility, industry, and transport and infrastructure customers to improve performance while lowering environmental impact. The ABB Group of companies operates in around 100 countries and employs about 145,000 people.

The Pros and Cons of 5 Robot Programming Methods