ABB to Showcase “New Era of Robotics” Built on the Pillars of Collaboration, Simplification and Integration at Automate 2015

AUBURN HILLS, Mich. – ABB Robotics will showcase “A New Era of Robotics” built upon the three pillars of collaboration, simplification and integration at Automate 2015, March 23-26 at McCormick Place in Chicago (Booth # 571). The themes are represented by numerous aspects of the Automate demos, including the collaboration of ABB Customer Service teams and programs that assure that all robotic systems operate at peak performance over their entire lives; the simplification afforded by software advancements that have reduced programming complexity and created an intuitive human machine interface for production operation; and the integration of sophisticated robot controllers with leading motion control technologies that allow easy integration of additional hardware, sensors and other peripherals.

IRB 1200 Robot with the ABB FlexFeeder:  the IRB 1200 small robot family provides flexibility, ease of use, short cycle times, and a unique combination of a compact footprint and a large work envelope. It is designed for a wide range of material handling, machine tending and small parts assembly applications, and is innovatively designed with no offset in axis two, delivering a longer stroke that allows the robot to be placed very close to the work piece and still be functional. Combined with other signature features, the longer stroke enables up to 15% smaller work cells and 10% shorter cycle times than comparable robots. 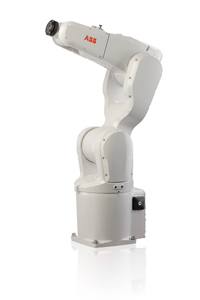 The demo also features the new ABB FlexFeeder, an ultra-compact flexible parts feeding system designed for small parts assembly applications such as consumer electronics, computers and communication devices. The FlexFeeder, in combination with ABB’s Integrated Vision, allows the sorting of an array of components, ranging from 3 -30 mm, without having to change the feeder each time a different component is fed into the system. It utilizes a pneumatically actuated mechanical system to present randomly positioned parts in a way that makes it possible for a vision equipped robot to pick the parts accurately.

IRB 6700 Robot with Scanner Laser Welding System:  the IRB 6700 robot equipped with state-of-the-art Trumpf PFO (Programmable Focusing Optics) welding technology, enabling welding-on-the-fly coordination of head mirrors and robot motion without the use of a PC.  The revolutionary new function package displays dedicated user interface screens on the robot FlexPendant for quick start-up, and program geometry offsets for monitoring and control of the laser system. The PFO technology is the fastest robotic laser welding system available, with the direct control of both the laser process and robot motion significantly reducing conventional robotic laser welding cycle times. The cell demo simulates the welding of automotive seat back assemblies.

The IRB 6700 is the seventh generation of large ABB robots; in addition to enhanced speed, payload and accuracy, the power consumption has been lowered by 15%, total cost of ownership has been reduced by up to 20%, and maintenance has been optimized, doubling the time between service intervals.

The expanded FlexPicker portfolio now includes 1 kg, 3 kg and 8 kg payload variants at the standard 1130 mm reach, and 1 kg and 6 kg variants at the extended 1600 mm reach. The 1 kg and 3 kg FlexPickers are available in an IP69K rated stainless variant, and the 6 kg and 8 kg models are available with IP67 protection suitable for most hygienic applications. The FlexPicker is the most widely used delta robot in the industry with over 7,000 installations worldwide.

Software Product Demo Cell: featuring an IRB 120 robot connected to six separate technology stations, presenting a future vision of how programming, commissioning, operating and supervising robots will work seamlessly from any device, anywhere, at any time. The tools are designed to maximize the productivity and simplify the user interface of ABB robotic systems across all applications. The six stations include:

About ABB
ABB is a leader in power and automation technologies that enable utility, industry, and transport and infrastructure customers to improve their performance while lowering environmental impact. The ABB Group of companies operates in roughly 100 countries and employs about 140,000 people.

ABB Robotics Showcases the Factory of the Future at Automate 2017