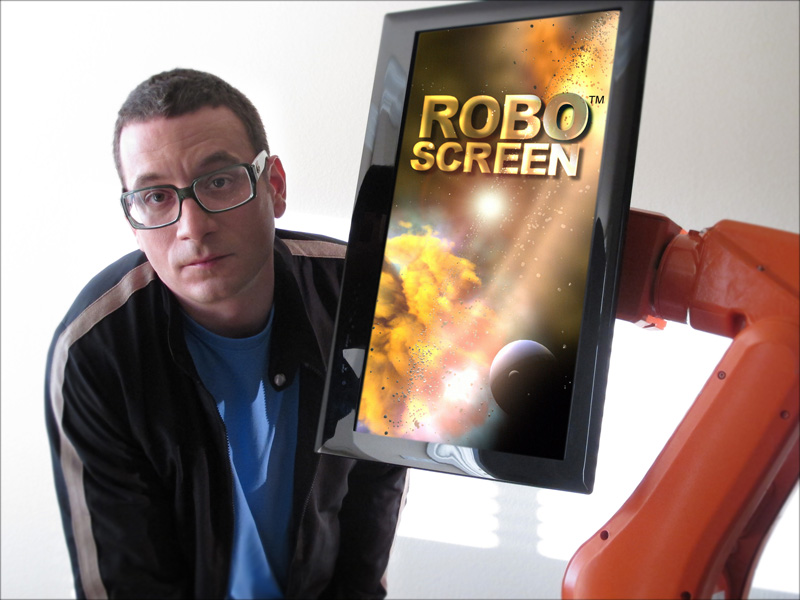 ABB Robotics has signed Andy Flessas (aka Andy Robot) and his company, Robotic Arts, to provide lead creative direction for the development of innovative robotic systems for the entertainment and commercial retail industries.  The agreement will formalize the existing relationship between Flessas and ABB, and accelerate the introduction of their collaboratively developed robotic technology into a variety of new venues including performance and event entertainment, sports bars, home theaters, and interactive point-of-purchase advertising.  Flessas gained significant prominence in 2010 when his revolutionary RoboScreen® technology made its concert debut as an integral part of the Bon Jovi Circle Tour, the top grossing global concert draw in 2010*.  A RoboScreen is a graphic panel mounted to the arm of an ABB industrial robot, intended to bring controlled movement to the visual media and create a unique viewer experience.  Five RoboScreens are currently performing on the Bon Jovi Live 2011 tour, moving to the beat of the music, displaying real time video and animations, and, at times, moving into various formations such as stairs and a fifty foot long, elevated performance platform.

Flessas’ experience with robots began in the mid-1990s, and reached elite status in 2006 when he completed a robotic programming, design and operation certification program at the ABB training facility in Auburn Hills, MI.  He has since developed a portfolio of unique entertainment- and human interaction-based concepts for industrial robots, some using RoboScreens and some involving other proprietary technology.

“Andy Flessas is one of those rare visionaries who develops concepts that are not only creative on their own merit, but are truly innovative because they revolutionize the realm in which they are applied.  The Bon Jovi project is a great example,” said Joe Campbell, vice president of the ABB Robot Products Group in the US.  “While we continue to expand ABB robots into a variety of new and existing industrial sectors, with Andy in our camp we plan to be leaders in introducing an array of non-traditional, in many cases artistic, applications for robotic technology.”

Several of the robotic concepts under current development for the entertainment and commercial retail markets cultivate the RoboScreen technology for alternative purposes:

“The potential for industrial robots to be lead components in the development of the next generation of entertainment, arts and retail concepts is unlimited.  The Bon Jovi RoboScreens really just scratch the surface,” said Flessas.  “Working with ABB gives Robotic Arts the superior level of global engineering strength that we need to bring our ideas to their full potential, and fulfill our goal of bringing the grace and agility of robots to the people.”

The Bon Jovi concert tours are the second major entertainment production that ABB robots have been involved with in the span of a year.  In 2009 a series of ABB robots were extensively featured in the climactic scene of the “Terminator Salvation” movie starring Christian Bale.

ABB is a leader in power and automation technologies that enable utility and industry customers to improve their performance while lowering environmental impact. The ABB Group of companies operates in around 100 countries and employs about 124,000 people.