Over twelve demos to showcase the Collaboration, Simplification and Digitalization that are the hallmarks of the flexible, agile and efficient factory of the future 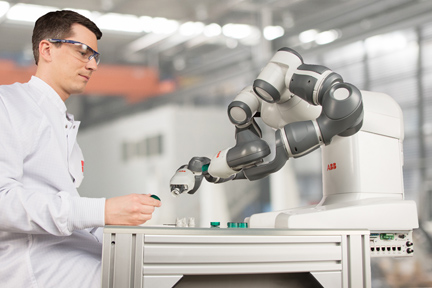 Auburn, Hills, Mich. - ABB will feature more than a dozen innovative robotic demos at the 2016 International Manufacturing Technology Show (IMTS), September 12-17 at McCormick Place in Chicago.  Occurring every two years, IMTS is one of the largest industrial fairs in the world, featuring the widest range of the latest manufacturing technology under one roof, for six full days.  The theme of the ABB booth (# N-6251) is Collaboration, Simplification and Digitalization, as ABB showcases its latest technology designed to provide manufacturers the flexibility and agility necessary to truly build the “Factory of the Future!”

As manufacturing moves from mass production to mass customization the flexibility to efficiently change and adapt production becomes critical. This requires increased collaboration between people and robots, between islands of automation and even between production sites. It also demands simplification to reduce programming time and provide intuitive human-machine interfaces, which allow manufacturers to seamlessly accommodate numerous products on a single system.  Digitalization ties it all together, where actionable information drives better decisions, and helps manufacturers unlock the benefits of ABB’s concept of the Internet of Things, Services and People (IoTSP), increasing productivity, flexibility and efficiency along the manufacturing value chain.

“Many manufacturers understand the importance of embracing these innovative technologies, but seek a clear industry leader to help effectively tailor them to their specific applications,” said Gustavo Sepulveda, ABB’s USA robotics general manager. “ABB is that leader, helping its customers manage this transition towards the factory of the future, while building their competitive edge for efficiency, reliability and market agility.”

Highlights of the ABB at IMTS 2016 booth include:

YuMi®: No barriers, no cages, no zones - the world’s first truly collaborative dual-arm industrial robot. YuMi is designed to work very closely with humans in a wide variety of small parts assembly and handling applications. The booth will feature two separate YuMi demos:

Robotic Machine Tending: Cutting-edge automation technologies designed to optimize machine tool efficiency and increase manufacturing productivity. With the recent acquisition of SVIA, the featured products include new additions to the ABB machine tending automation portfolio. The systems are quick and easy to install, feature a friendly human/ machine interface, and are suited for the full variety of machining applications and industries.

IRB 1200 Foundry Plus 2: Foundry robots have long contributed to the productivity and speed of heavy-duty metal casting and automotive applications, and are now becoming increasingly important in consumer electronics applications to cast light weight metals. ABB’s new IRB 1200 Foundry Plus 2 is a compact robot that can increase flexibility and reduce cycle times for precision casting processes such as smart phone cases and other electrical components.

Programming: RobotStudio®, ABB’s industry leading software tool for programming, configuration and virtual commissioning, designed to maximize the productivity and greatly simplify the user interface of ABB robotic systems across all applications. The demo highlights the RobotStudio interface with an all-in-one touch PC.

Connected Services: An exciting new IoTSP platform for robots that can prevent up to 25 percent of incidents, and speed response times and issue resolution by up to 60 percent. With over 5,000 robots connected in almost ten years, ABB is the clear connected leader in the robotics industry.

All ABB Robotics' products are fully supported by the ABB Robotics’ global sales and service organization in 53 countries and over 100 locations.