ABB has sold its first robot manufactured in the United States. The IRB 2600 robot is the first to be produced at the ABB Auburn Hills, Michigan facility, and was sold by ABB Value Provider, CIM SYSTEMS, INC. to Hitachi Powdered Metals USA. The compact robot, which is painted with special commemorative red, white and blue paint, will be used for material handling of in-process engine component parts at the Hitachi Greensburg, Indiana facility. It is the 180th ABB robot at the Hitachi plant, which installed its first ABB robot in 2005. 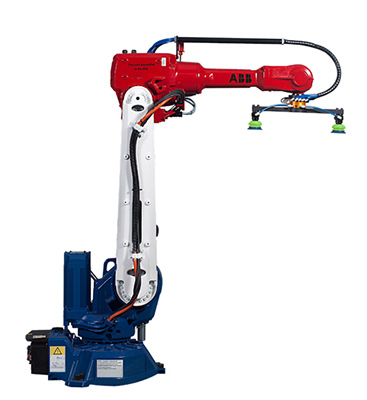 presence in the Americas,” said Sami Atiya, President of ABB’s Robotics and Motion division. “It is a major step towards our goal of providing local customers with delivery schedules and technical support that are far superior to other robot manufacturers.”

James Adams, the Chief Engineer of robots and automation at Hitachi says, “Hitachi is honored to receive the US manufactured ABB robot. It will be prominently positioned on our plant floor to showcase the essential role ABB robots have in our operation, and our passion to keep production in the US. For a company of our size the volume of robots we have is unprecedented. I truly believe that if we didn’t have robots in our facility we wouldn’t be in business today.”

In May 2015, ABB announced that it would begin producing robots at its Auburn Hills facility, making it the first of the major industrial robot companies to fully commit to an American manufacturing footprint.

The delivery of the first US manufactured robot is consistent with the production schedule announced at the factory opening. In addition to the IRB 2600, ABB will begin manufacturing other popular robot models in Auburn Hills this year. By 2018 it is planned that 75% of all the models delivered to North American end-users will be manufactured in the United States. Previously ABB robots sold in the Americas were made in Sweden and in China.

“We are proud to be involved in the placement of the first ABB robot manufactured in the United States,” said Dave Fox, President of CIM Systems Inc. “We have already seen a reduction in lead times since the Auburn Hills plant opened, and it has helped us get some business that was directly related to improved delivery turnaround.”

All ABB Robotics' products are fully supported by the ABB Robotics’ global sales and service organization in 53 countries and over 100 locations.

About CIM SYSTEMS
provides common-sense solutions for complex production and processing environments, bringing a proven track record, a reputation for honesty and integrity, and an unwavering commitment to serving our customers’ needs to all projects. CIM specializes in material handling, machine tending, packaging, and palletizing, but we offer creative solutions for other applications as well. Turnkey packages include: system design/engineering, new/used robots, integration with other equipment, tooling, safety products, installation, programming and training.

ABB Announces that SafeMove2 is Now Available on the IRB 1200