ABB Robotics Showcases the Factory of the Future at Automate 2017

ABB will exhibit a selection of its latest and most innovative robotic technologies at Automate 2017, April 3-6 at McCormick Place in Chicago. Hosted biennially by the Association for Advancing Automation (A3), Automate is the broadest industrial automation event in North America, featuring the latest in cutting-edge robotics, vision and motion control. The theme of the ABB booth (# 1635) is “Collaboration and Digitalization for the Flexible and Efficient Factory of the Future.”

Collaboration is highlighted by YuMi®, the industry’s first truly collaborative robot, and SafeMove2, the latest generation of ABB’s safety certified robot monitoring software. YuMi is specifically designed to work alongside humans in a variety of small part assembly and material handling tasks. SafeMove2 enables people to safely work alongside ABB robots with payloads ranging from 6kg to 800kg without compromising productivity, providing an optimum level of collaboration and flexibility for higher speed, higher throughput applications that typically require more insular levels of safety.

At the ABB booth an IRB 1200 equipped with SafeMove2 will work together with YuMi®, the world’s first truly collab 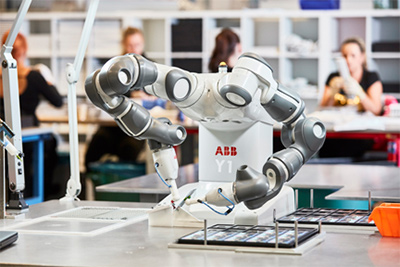 Digitalization tools such as ABB’s Connected Services allow manufacturers to harness the full value of intelligence from single robots through to entire fleets, using real-time data from intuitive dashboards to improve robot system performance and reliability. Connected Services are part of the ongoing evolution of the Remote Services platform for robots which ABB introduced nearly a decade ago and reflect the benefits of integrating more than 6,000 robots into the manufacturing ecosystem.

Both collaboration and digitalization are essential elements of the flexible and efficient Factory of the Future, where manufacturers can respond with ease to the high mix, low volume production cycles created by shorter product lifespans, changing customer tastes and made-to-order strategies.

“One of the key advantages our North America manufacturing customers have in terms of global competitiveness is their ability to serve local customers with agility and flexibility,” said Gustavo Sepulveda, USA Robotics Managing Director. “Smarter factories with smarter automation systems that take advantage of collaboration and digitalization are driving a resurgence of manufacturing and reshoring here in North America.”

Highlights of the ABB Automate 2017 booth include: