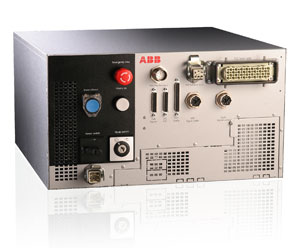 “What should interest many robot users is that we are rolling out the recently introduced Compact version of the IRC5 controller on a wide range of robot types,” noted Joe Campbell, vice president sales and marketing for ABB Robotics, North America.  “In addition to the small IRB 120 robot, the new version of RobotWare 5.13 allows the IRC5 Compact controller to be used with the IRB 140 and IRB 1410 robots.  And this range will further expand during 2010.”

In the packaging segment RobotWare 5.13’s new “indexing conveyor” function allows a conveyor to be driven by the robot as an additional axis. When combined with ABB’s IRB 360 FlexPicker, this feature increases picking and packing cycle times up to 450 products per minute. This function eliminates the need for expensive racetrack installations and helps to significantly reduce the overall cost of a packaging line installation.

Another new feature integrated into RobotWare 5.13 is ABB’s new Torque Slave software, which enables multiple motors to be driven as a single logical axis. Using this function the robot is able to control heavy-duty equipment, such as large workpiece positioners.

To extend the savings associated with the low cost DeviceNet™ Lean bus to more end-users, ABB has extended it to support up to 20 units (previously 6) and to allow the control of third party I/O units. In addition, the lean version of DeviceNet protocol offers new auto configuration and bus scan tools for seamless communications with all connected devices.

“We have also introduced a wide range of other improvements delivering added efficiency and ease of use in very many robot applications,” added Campbell. “What remains unchanged is ABB’s advanced motion technology which still provides the most accurate path following and shortest cycle times on the market.”

ABB (www.abb.com) is a leader in power and automation technologies that enable utility and industry customers to improve their performance while lowering environmental impact. The ABB Group of companies operates in around 100 countries and employs about 117,000 people.