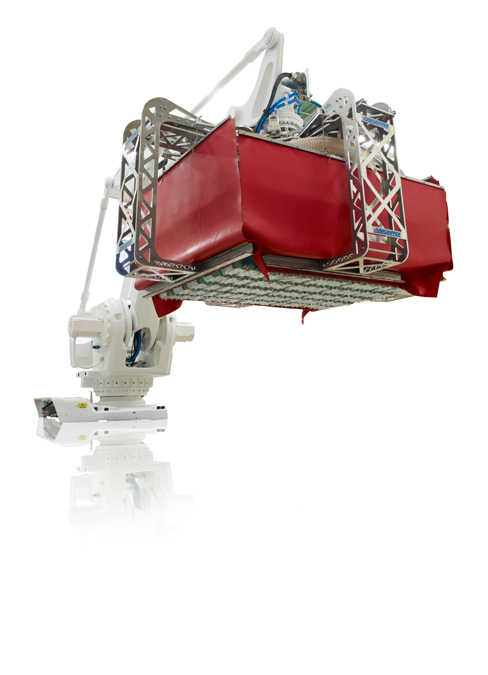 The robots demonstrate the palletizing and depalletizing of varying formats of corrugated cases, beginning with the high speed, compact IRB 460 picking individual cases from the infeed conveyor and placing them into a preconfigured pattern on the pallet. An IRB 760 palletizing robot then transfers a full layer of cases and places them on a pallet in front of an IRB 660 robot, which picks the boxes a row at a time and places them back on the conveyor, keeping the whole sequence in constant motion.

The IRB 760, designed for high-throughput, full-layer palletizing and depalletizing, is equipped with a Schmalz vacuum layer gripper.  With a payload capacity of 450 kilograms and a reach of 3.2 meters, this 4-axis robot features a high inertia wrist – double that of competitors – that enables it to handle heavier and larger product and tooling payloads faster than any other robot in this class. The high payload IRB 760 is especially suited for palletizing in the beverage, building material and chemical applications.

The IRB 660 combines a 3.15 meter reach with variants handling 180kg or 250 kg payload, making it ideal for palletizing multiple boxes, crates, trays and more in a single cycle. The configuration of the IRB 660 robot allows the robot to service four infeed systems and four pallet positions and still achieve a full 110” pallet stack height. It is equipped in this demo with the ABB FlexGripper Vacuum multi-zoned rail gripper.

The IRB 660 and 760 robots are programmed using Robot Studio Palletizing PowerPac software, which combines previously developed ABB software technologies – PickMaster 5 and RobotStudio – into a single bundle. The Palletizing PowerPac has been developed in a logical format allowing users to configure the product conveyors, pallet locations, gripper functionality, the definition of each product to be handled, and the configuration of all products and components included in the pallet stack. Once the cell configuration is complete, RobotStudio Palletizing PowerPac provides a fully functional palletizing cell simulation with accurate robot performance information. The complete RobotStudio model is ready to be transferred directly to the robot controller for cell operation.

The centerpiece of the high speed picking demo is the IRB 360 FlexPicker utilizing integrated vision and a single cup vacuum gripper to pick randomly presented packages off one conveyor and place them on another in uniform rows at a rate in excess of 120 per minute. An invert mounted IRB 120 Cleanroom robot, ABB’s smallest 6-axis robot, picks the packages off the second conveyor and places them back on the first in a random orientation to continue the loop.  The ABB FlexPicker is designed for operation in sanitary environments such as direct food handling or pharmaceutical applications, and the stainless (rated IP69K) model withstands the most stringent cleaning operations associated with sanitary product handling.  Multiple variants of work envelopes (800, 1130 and 1600mm), payloads (1kg, 3kg and 6kg), and environmental protections are available to meet most application requirements. The featured IRB 120 Cleanroom model is ISO 5 (Class 100), suited for material handling applications in industries such as medical device packaging, pharmaceutical packaging and electronics. The PickMaster system software can control up to 10 robots and 10 cameras simultaneously.  The FlexPicker is the most widely used Delta robot in the industry with over 5,000 worldwide installations since 1997

The giant 10-axis welding system is an IRB 140, 6-axis robot with Fronius twin wire welding equipment attached to the arm of a larger IRB 660, 4-axis robot.  The system provides an economical alternative to a robot traveling on a traditional gantry column; and with a smaller footprint, longer reach (3.1m), and the ability to sequentially work in four separate welding quadrants from a fixed position, it also delivers significantly better cycle times.  Ideal for welding large parts, the demo is simulating the welding of an off-road vehicle chassis; with the IRB 800 and the head/tailstock servo controlled positioner that holds the part fully coordinated with ABB’s MultiMove software, manipulating all 11 axes for optimum weld positioning.