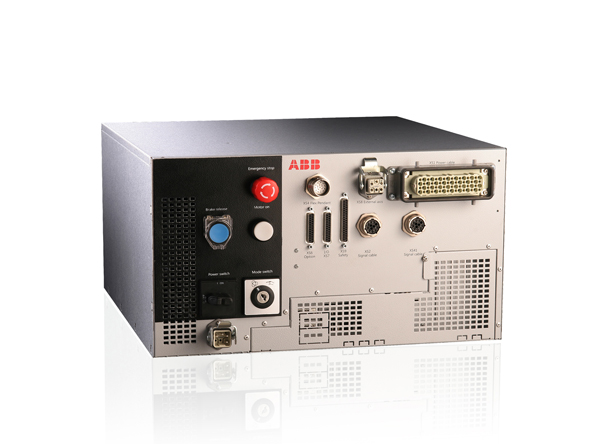 AUBURN HILLS, Mich. – ABB Robotics has extended the functionality of its IRC5 Compact controller to six additional ABB robot families.  ABB’s smallest controller was introduced in 2009 along with the introduction of the IRB 120, ABB’s smallest 6-axis robot.  The compact controller will now support the IRB 120, IRB 140, IRB 260, IRB 360 FlexPicker™, IRB 1410 and IRB 1600 robot families, offering the benefits of a greatly reduced controller footprint and simplified commissioning to a wider range of applications.

With the line extensions the IRC5 Compact will be frequently paired with the IRB 140, IRB 1410 and IRB 1600, ABB’s smaller 6-axis, articulated arm robots.  The IRB 1410 is especially designed and equipped for arc welding applications, while the IRB 140 and IRB 1600 bring powerful performance to arc welding, material handling, assembly and machine tending applications.  The IRB 360 FlexPicker will now be available with the IRC5 Compact meeting demands of varying requirements in the food, pharmaceutical, biotech and solar markets.  The IRB 260 is a 4-axis robot designed for packing applications. The IRC5 Compact will be especially valuable where the available workspace is limited.

"Our system integrators and end-users have been asking for the IRC5 Compact to be available on a wider range of robots, and this is obviously a big step in that direction,” said Joe Campbell, vice president of the ABB Robot Products Group in the US.  “The IRC5 has the most cabinet variations in the industry, and now our smaller robot customers will have more controller options to match their specific application and system requirements.”

The IRC5 Compact controller also enables easy commissioning through the one-phase power input, external connectors for all signals and a built-in, expandable 16 in, 16 out I/O system. The system also supports the use of RobotStudio for offline programming and Remote Service for on-line condition monitoring. This allows manufacturers and integrators to optimize cell design and helps prevent costly downtime or production delays.