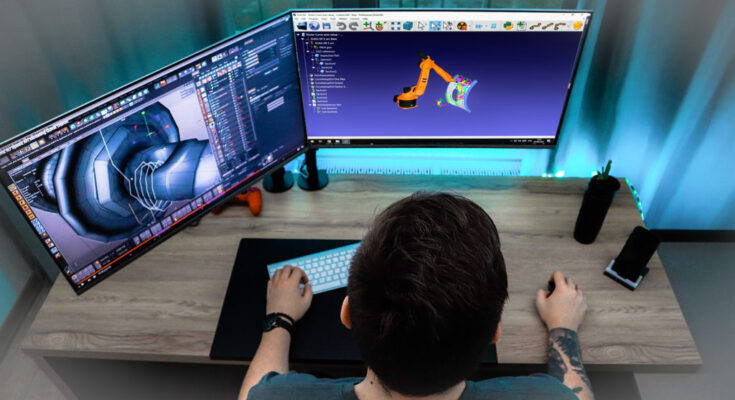 Perhaps you came to RoboDK looking for a killer feature that it didn’t appear to have. Or perhaps you have been using it for a while and you want to get more out of it.

You might wonder… is it even possible to get your chosen feature within RoboDK?

Here are some powerful features that you might not know about yet.

We are always upgrading RoboDK. We have a very active userbase and many of you have suggested new tweaks, upgrades, and features over the years that we have integrated into RoboDK to make it even better.

But, you might wonder if there are features that you may have missed.

Sometimes, we come to a new piece of software looking for a key set of features and we are disappointed. When we don’t see that one killer feature that we need, we discount the software immediately and move to the next software on our list.

This can happen to people when they are looking for new robot programming software. They end up hopping from one software to another, constantly trying out the free demos but never settling on one software package.

But, these people are missing out.

There is more than one way to get that killer feature in a robot software package. In RoboDK, there is a very powerful way of adding new features that few people realize is even there.

The Lesser-Known Superpower of RoboDK Plugins

Unlike many robot software packages, RoboDK is very extensible. There are many ways that you can add new features and extend the capabilities of the software with just a little bit of programming.

At the most basic level, you can use Python programming within RoboDK. This allows you to program your robot directly using this simple and popular programming language.

You can also extend the software’s capability by using the RoboDK API to connect external code with RoboDK. Plus, you can use our CAD/CAM plugins to link RoboDK with many popular CAD/CAM programs.

But, there is one method of extending RoboDK’s capabilities that allows you to supercharge the native capabilities of RoboDK itself.

RoboDK plugins are a hugely powerful way of adding almost any feature you might think of into the software.

You can use one of our existing plugins to access lesser-known capabilities that we have already developed or you can create your own plugin.

There is already a set of existing plugins that can boost RoboDK’s capabilities at the click of a button.

This collection is growing and changing all the time, but here we will show you 9 plugins that are available in your copy of RoboDK right now that you might not know about yet. You can access such plugins by going to “Tools>Plug-Ins.”

One hotly-anticipated plugin comes in the form of our collision-free planner. This allows you to automatically create robot motions between two points in the robot’s workspace without colliding with any objects. For more information about this feature check out our blog post about how the planner works.

Gravity is not usually useful in industrial robotic simulation. However, there are some applications where may be useful that objects behave as they would in the real world. The gravity plugin allows you to activate a simple form of gravity for such applications.

Palletizing is one of the most common robot tasks in logistics. It is an extended pick and place task where objects are laid out in a regular pattern onto a pallet. The new palletizing plugin provides you with the capability to automatically create this pattern and create the control motions for the robot.

Most people use RoboDK to program their robots offline in a simulation and then download the program to the robot itself. This does not require real-time performance. However, it’s also possible to control a robot in real-time, for which you might need the real-time plugin. Check out this blog post for an example.

Robot pilot is a simple plugin that allows you to move the robot with the click of a button, in a similar manner to “jogging” with a robot’s teach pendant. You simply choose whether you want to move the robot’s reference, tool, or joints then click the corresponding button to move the robot by a defined amount.

The OPC Unified Architecture is a machine-to-machine communication protocol. It is platform-independent and specifically designed to allow for open, secure communication in an industrial setting. It is widely used in automotive manufacturing, food manufacturing, and packaging. The OPC-UA platform allows RoboDK to integrate with it.

Chip8 is a very simple programming language that was used for game design in the past. This fun plugin was developed by embedded systems expert Phillip May. It shows how a robot can be programmed in RoboDK to emulate a Chip8 processor, which really demonstrates the programming power of plugins! You can even load your own game ROMs into it.

The real power of RoboDK’s plugin interface is that you can create your own plugins. The limits of this are only in your imagination and your coding abilities. Check out the Plugin example in our plugin interface Github page to see how it’s done.

Finally, you don’t even need to create a plugin to get the same benefit! The AppLoader plugin provides a way for you to easily load scripts and executable files into RoboDK as if they were plugins. Check out the AppLoader Github page for more details.

How to Get the Most from RoboDK Plugins

The above plugins are great, but the real power of RoboDK plugins comes when you start creating them for yourself.

You no longer need to be concerned when you think of a killer feature that the software doesn’t have yet.

You can just create it yourself!

Or, you can submit a request in our popular feature-request forum thread.