Drawing on two decades of experience in the industry, XIMEA offer consists of state-of-the-art cameras with USB 3.0, USB 2.0, PCI Express and FireWire interface as well as X-RAY, Hyperspectral and Thunderbolt™ technology enabled cameras. For more than 20 years XIMEA has developed, manufactured and sold standard or OEM cameras for machine vision applications in motion control, assembly, robotics, industrial inspection and security, as well as scientific grade cameras for life science and microscopy. The main distinction is based on extremely robust way the cameras are built while still providing highest speed like for example the USB3 Vision camera line.

XIMEA demonstrates a new record of distance and speed by starting its xiB line of cameras, which are based on PCI Express.

XIMEA has presented the new, first model called CB200 at the SPS IPC Drives show in Nurnberg – a 5K custom digital camera which delivers 20Mpixel and crystal clear images at 30 frames per second over distances as long as 300 meters, made possible with the help of a fiberoptic cable. 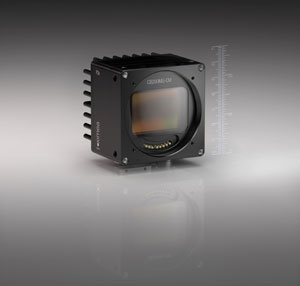 The model and its complete data sheet can found here: http://www.ximea.com/en/products/specialty-cameras

The camera’s data and control interface is fully compliant with PCI Express External Cabling Specifications, which allows data throughput of more than 800MB/sec over 300 meters, and 1.6GB/sec over a 100 meter long cable -- more than any other interface will be able to compete with.

Such data transfer is needed for this model, which is based on the newest 20 Mpix sensors from CMOSIS, called the CMV20000. This high quality CMOS sensor has Global Shutter, providing 12 bit images at an unprecedented speed. This performance can be even further improved through optional cooling.

Enhancing the convenience factor, a PCIe cable interface implemented inside the camera eliminates any frame grabber needs. Image data is seamlessly delivered, and is stored right inside the PC memory, becoming immediately available for processing and encoding by CPU and/or GPU.

In order to provide users synchronization ability with external equipment and other cameras, this model is equipped with opto-isolated inputs and outputs, which are exposed from a compact and robust camera body with an industrial connector. In order to slim down footprints, both connectors are located on the bottom.

As usual, XIMEA cameras offer extremely low power consumption, consisting of only 4.5W, allowing delivery through the fiberoptic cable itself and thus eliminating the need for any additional infrastructure and making integration or change even easier.

This model is also equipped with an integrated interface compatible with Canon EF-mount lens, and also allows remote control of aperture, focus and zoom.

For more than 20 years XIMEA has developed, manufactured and sold standard or OEM cameras for machine vision applications in motion control, assembly, robotics, industrial inspection and security, as well as scientific grade cameras for life science and microscopy.