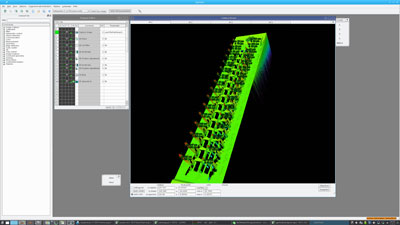 With the new EyeScan AT 3D the EyeVision image processing software shows its new 3C commands and display options for the point cloud. And whats more, the EVT Creative Department has optimized a method for the inspection of connectors respectively the inspection of pins. But it is not limited to only one kind of connectors, it is a flexible system and works for almost any connector, to check the flawlessness of the pins.

Therefore, with only one scan by the EyeScan AT 3D sensor with the EyeVision software, the following characteristics of the scanned object can be measured:

For one thing the software is carrying out a measurement of the so called wobble-circle. These are gauges to measure connector tolerances and staggering of the pins.

And another thing is the measurement of the embedment depth of the pins. Thanks to the 3D-inspection it is possible to measure the height of the pin tip. And additionally the pin tips are not only measured in there x- and y-direction but also in z-direction. 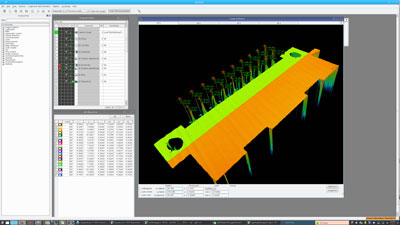 Furthermore the system can detect flaws such as e.g. if the connector pins are straight or bent, if the pins are stuck too deeply into the housing or if the pins stick out too far out of the housing. The EyeScan AT 3D sensor is also very precise. The laser triangulation sensor delivers 2048 points per profile in a time of 25.000 profiles per second. „Laser triangulation“ means that, a camera is following a laser line which is projected onto the scan object and from that captured image the line profile and height information are calculated. During the passing by of the scan object under the camera, several profiles are created, which are used to make 3D image.

The EyeVision software has the necessary commands available to evaluate a point cloud and to measure e.g. the connector pins but also other small objects. As EVT has created a command for that measurement, the further proceedings for the user are simple. With the ready-to-use commands and the drag-and-drop function of the software, even users without programming skills can create an inspection program.

All in focus – EyeVision Supports The Imaging Source Autofocus Cameras