Wireless Part I: The Good, the Bad, and the Ugly

We live in an increasingly wireless world, from phone service to computer networking to parcel delivery and car entry. Now, the technology is moving into the industrial sector, making it only appropriate to examine how it is affecting motion control.

Replacing cabling with wireless communications offers a number of benefits, including reduced cost, footprint, points of failure, and particulation, plus simplified installation and maintenance. The introduction of industrial Ethernet has eliminated the need for installers and maintenance techs to crawl under machines looking for test points; wireless offers that advantage in spades. “You’re able to eliminate the labor costs associated with having to make cables, route cables, connect discrete points,” says John Guite, Business Unit Manager at Parker Hannifin Corp. (Rohnert Park, California).

Of course, along with big benefits come big challenges, chief among them reliability, security and safety. Where is the balance and what is the level of adoption in industry, both now and in the future?

Wireless basics
As with industrial Ethernet, there are a number of industrial wireless protocols, both proprietary and open, jockeying for position. Most of them are based on one of the IEEE 802.1x standards, such as 802.11a/b/g, 802.15.1 or 802.15.4. 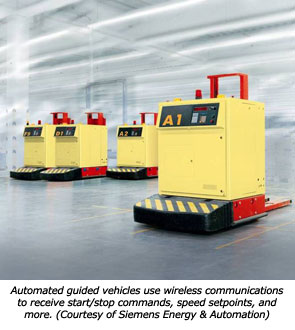 One of the primary demands that motion control imposes on communications is speed. The technology has to be able to provide a quality signal at the required data rate. We can essentially divide motion control communications into two classes. The first, most important type of communications is the transfer of the actual control signals: trajectory commands passed from motion controller to drive or commutation commands passed from drive to motor. “That needs to be very high speed, in the range of 2 to 4 ms, and it needs to be deterministic, with less than 1 μs of jitter,” says Zuri Evans, Simotion Product Manager at Siemens Energy & Automation, Inc. (Norcross, Georgia). “Right now, wireless does not support that. It's just not dependable enough, so for those communications we're still going to use a wired connection.”

The other type involves standard communications from the motion controller to the PLC or PC: start/stop information, speed setpoints, etc. Performing these sorts of interchanges wirelessly provides significant benefits, eliminating the need for workers to control overhead cranes with pendants, for example. Other standard communications include tasks like downloading cam profiles during product changeovers, communicating with HMIs, and so on. Here, too, wireless has a role to play - provided it can perform to requirements.

Make it reliable
Anyone who’s ever suffered a dropped mobile phone call when driving into a tunnel or put a metal stapler next to a wireless keyboard knows that wireless connections are subject to outside conditions. In the case of production lines for which even a minute of downtime can create significant backlog and cost thousands of dollars, arbitrary and frequent network outages are unacceptable.

One solution is the use of a mesh network architecture instead of a series of point-to-point connections. A mesh network consists of a central coordinator and a set of nodes distributed throughout the workspace. The signal reaches its destination by leapfrogging, in effect, from node to node; similar to the way an IP packet travels across the Internet. A point-to-point network can be vulnerable to changes or movement, for example if an axis with a line of sight to a controller moves behind a piece of metal. Not so with a mesh network; if a node loses its connection, the signal automatically reroutes itself along a different path to reach its end point.

The Parker Hannifin group tested the capabilities of mesh networking using the ZigBee standard. “We would move our drives and controls around the building, throw them behind metal and make sure that the direct connection was dropped,” says Steve Danek, Engineering Manager at the company. “We used a network analyzer to monitor the traffic and see the rerouting happening through a third node.”

Obviously, the more nodes you have, the more degrees of freedom the network has to reroute signals, but nodes also cost money, making network design a balancing act. “One motivation for going wireless is to reduce the cost of the cabling and installation,” says Greg Semrow, Product Manager, Low Voltage Drives at ABB Inc. (New Berlin, Wisconsin). “If you have to have multiple access points, you're obviously adding cost to the system.”

The key is to have only as many nodes as will provide effective performance. The machine designer needs to evaluate the environment and the application. “Provisioning and building a wireless network probably takes a little more planning than a wired system,” Danek acknowledges. “Each installation is unique.”

Have a plan
For wireless systems, planning is crucial. That means evaluating your application, then doing a detailed site survey. “The site survey is probably one of the most important aspects of coming up with the wireless design,” says system integrator Melvin Foo, Principal Engineer at system integrator Kazio Networks (Leesport, Pennsylvania). “You’ve got to know what’s there. Is there interference? Are there reflections? How much metal do you have in your plant? Are there hidden terminals that emit different frequencies that might disturb your system? You've got to do the analysis and find out how it fits into your user requirements. You have to come up with a plan before you come up with a design.” The information that needs to be gathered includes application requirements, type of wireless implementation, choice of frequency bands, size of the area to be covered, and more.

Electronic noise is a perennial problem on factory floors, especially in these days of WiFi and Bluetooth, not to mention microwave ovens, all of which operate in the 2.4 GHz frequency band. That makes standards like IEEE 802.11a and 802.15.4 particularly appealing for industrial wireless. “You can put your control related communications on 802.11a at 5 GHz, which is less likely to be a frequency that’s being used in a plant environment,” says Jeremy Bryant, Industrial Communications Manager at Siemens. “Sometimes what our customers will do is monitor diagnostic pages using 802.11b or 802.11g because viewing data is not a very time sensitive operation, then for supplying start/stop set points, they’ll use 802.11a because they want to be on a frequency that's least likely to have interference.” When it comes to commands, time is of the essence. “If you're updating your website and it takes a little while to refresh, it's painful but the end of the world doesn't occur, whereas with control applications, you have to send updates to the devices every 8 ms.  Within the world of wireless, that would be considered a high-performance application.”

The site plan is only the first part. Policies need to be set in place to prevent behavior that can trigger outages, like parking a forklift in front of a coordinator. “It’s as easy as someone bringing in a microwave,” says Foo, citing the example of a client installation that initially went smoothly - until the company added a new break room near the factory floor. “Suddenly, there were problems. You can plan the best you can, but if you don't have certain policies or rules and regulations within the plant, no amount of planning is going to solve that.”

Make it secure
The plan shouldn’t just encompass reliability and performance; it also needs to cover security. Wireless computer networking groups have developed various encryption schemes such as WP, WPA andWPA-2, some of which are leveraged by the various industrial wireless protocols. The security strategy, Foo maintains, is even more important than the methods used.  “You have to have some kind of security policy in place first, and then you look at the type of technology that can actually prevent [intrusions]. If you’re using the same wireless bands being used by another system, how does that play into the security or reliability of your network? Can someone tap into it accidentally? You’ve got to have a good wireless plan before you try to implement.”

One method for minimizing vulnerability is to limit the transmission range of signals. Forget about signals that transmit across the technology park; ideally, they shouldn’t even stretch outside of the production area. A system tuned for maximum range is not only more vulnerable to interception; it’s more likely to suffer interference because the receivers are turned up. Better to adjust the network so that signals only travel as far as absolutely necessary, minimizing vulnerability and noise.

The various standards feature additional protection. Like Bluetooth, ZigBee requires that any node on the network carry a unique ID and be listed in a table on the coordinator, adding a layer of security. “It would be virtually impossible for someone to impersonate a node on one of these networks because the coordinator itself has to allow that in its own memory table,” says Guite. “[A hacker] would have to communicate directly with the coordinator and change its memory table to include a particular node ID, so it would be a very difficult thing to do.”

The approach pays additional dividends when it comes to restricting commands. Consider two identical machines set side by side. What prevents a cam profile intended for machine A from being downloaded to machine B? If each machine has a coordinator with a table of the IDs that belong in its network, then it will ignore any command for an ID that is not on its table.

Companies can also use existing security technology - not just wireless encryption but other computer networking technologies. Siemens, for example, uses wireless to leverage web-based controls and diagnostics. “Web pages and wireless are designed to work together, so there’s a lot of protection that we’re inherently getting just by putting a lot of that functionality into a web server,” Evans says. “You can log in to your controller with your Blackberry or your iPhone and then you can pull up all of the diagnostic information on any machine that's within the wireless network range by just typing in a different IP address.”

Of course, any security scheme can be cracked if the hacker is determined enough. Ultimately, it’s important to be realistic about the degree of security risk faced by wireless motion control. “It's not Microsoft, it’s an industrial network,” Semrow observes. “How many hackers out there want to turn the lights on and off in a building or shut down a machine? Yes, it’s a concern and definitely needs to be considered during the development of such a system but I don't think the risk is as great as you could have with a PC or an ERP system.”

The bigger concern, he asserts, is safety. A wireless network is great as long as it works, but what happens when it doesn’t? Consider applications like overhead cranes and automated guided vehicles. “The biggest concern from my perspective is how do I safely bring the process to a stop?” says Semrow. “What if I get interference, what if I get electrical noise on my wireless transmit or the receiver goes down? How quickly does the system respond to bring that moving crane or whatever it is to a safe stop?”

One approach is to distribute intelligence in the system so that if components lose the signal and cannot re-establish a connection to the coordinator, they shut themselves down and go into a safe stop mode.

It all comes down to having a good plan, not just for safety but for the wireless system as a whole. An investment of time upfront can reduce headaches, cost and delays in the long run.

In Part II of this article, we’ll investigate how machine builders and customers are combining wireless and motion control.