When Two Arcs are Better Than One: Tandem GMAW Versus Multiple Robot Arms

Manufacturers of Tandem Gas Metal Arc Welding (GMAW) systems that supply two welding wires through a single torch often promise to double welding productivity – but in actuality, the results you can reasonably expect to achieve vary depending upon your application.  When does it make sense to use the  Tandem GMAW process versus adding robot(s) to a cell?

Tandem GMAW systems normally involve two separate power supplies which share a master controller to coordinate the wire feeding and current control between the two wires.  The price for these systems can approach $50,000 each, which ironically is about the same dollar figure as adding a welding robot. 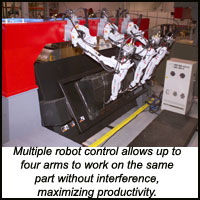 Several robotic manufacturers now provide the ability to control multiple robot arms from a single controller.  This technology allows the user to program up to four robot arms using a single teach pendant.  This common control allows the robot arms to work very closely together with a very low risk of colliding.

With price tags being relatively the same, manufacturers have to look at other considerations to determine which technology is best for their application.

The Tandem GMAW process has been evolving for several years.  The automotive sector initially had great interest in Tandem GMAW technology due to the potential for increasing productivity.  Most of these automotive applications involved material thickness’ of 3 mm (0.125’‘) or less.  Minor variations in joint location or gap conditions often caused a reduction in travel speed to 1.5 times the speed of a single-wire application.  The heat generated from the tandem arcs also increased the likelihood of burning through the material if joint conditions were not ideal.  Unfortunately, this often resulted in parts that had to be scrapped versus repaired.  The process also required a higher skill level to set up and maintain.  While several applications within the automotive sector (mainly in suspensions) have been successful, the trend in this market has been to add multiple welding robots into a single work cell.

Most automotive components are made up of several short, intermittent welds.  The use of a second robot arm not only cuts the welding time in half, it also reduces the ‘‘air cut’‘ time that the robot spends repositioning the torch.  This often produces a shorter cycle time with shorter welds even if the Tandem GMAW process can weld 2.5 times faster than a single-wire process.  The introduction of the multiple robot controller further improves this efficiency by eliminating the need for ‘‘I/O handshaking’‘ delays, reducing programming time, and making it easier to have robots cross over and work in shared work envelopes.  Newer application-specific welding robots with integrated upper arm cabling reduce interference and allow multiple welding robots to work together more closely than ever before without worries about interference.

The trend to add more robots for improved productivity is increasing to three or four arms.  Automotive production normally involves expensive automated fixturing, the cost of which can approach that of the capital equipment in a robotic work cell.  The economics of adding a third or fourth welding robot for $50,000 each to a work cell that may cost between $300,000 to $500,000 dollars can be easy to justify.  If the part is not symmetrical, the cycle times might not be distributed evenly among the three robots.  Engineers might discount the idea of spending extra capital if the third robot is only working a small percentage of the cycle.  However, some manufacturers are realizing that the third robot is easy to justify if it can cut 10 seconds from a 60 second cycle time, even if the arm is idle a large portion of the time.  In this example, the shorter cycle time can yield an overall productivity improvement of nearly 17 percent, which maximizes the return on the additional investment. 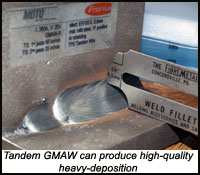 The Tandem GMAW process makes more sense on larger, heavier weldments.  These normally involve plate thicknesses with fillet welds that are 6 mm (0.25’‘) or larger.  Welding speeds can be close to twice as fast.  In addition, Tandem GMAW can make larger fillet welds in a single pass and may reduce the amount of multi-pass welding required.  Heavier weldments often have weld lengths that are measured in feet instead of inches.  These longer welds mean that the robot is welding a high percentage of the cycle, often over 95 percent of the time.  In this case, it is easy to justify the additional cost of the Tandem GMAW (about 2.5 times the cost of single-wire welding equipment) to achieve the higher process speed -- even if takes longer to clean the nozzle or tip changes need to be made more frequently.

The size of heavier weldments may require a more expensive capital solution like extended-reach manipulators, track-mounted robot(s) or a robot invert-mounted from a transport beam to provide extended reach, so the cost of adding an additional robot may be well beyond the $50,000 mark typical for a smaller cell. So again, the higher investment in the Tandem GMAW process may provide a better payback than an additional robot. 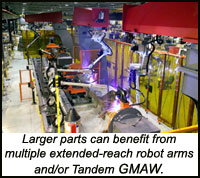 The above outlines two extremes of welding applications, smaller automotive components versus large heavy fabrications, but what about components that fall somewhere in between?  A fabricator of construction machinery had a dual-robot cell equipped with Tandem GMAW on both robots.  One might think that this should have been the best of both worlds.  The cell is used to fabricate smaller landscaping buckets for skid steer loaders.  The smaller buckets are made from sheet steel and utilize lap and fillet welds from 3-6 mm in size.  The manufacturer did note higher travel speeds with the Tandem GMAW process, but the cell is not necessarily more productive than their other two robot cells equipped with single-wire torches.  Many of the bucket designs utilize skip welds as opposed to long, continuous welds, so the air cut time is higher than that of similar parts made from thicker material.  Additionally, this manufacturer commented that the Tandem GMAW process was more difficult to maintain in production and somewhat sensitive to part variation.  Newer systems they installed have two robots with single-wire torches, but include laser cameras for seam-finding versus classic touch-sensing.  They reported higher productivity with these new cells along with less rework.

Ease of Use, Maintenance
Some key features are important for a robotic Tandem GMAW system.  Most share a central controller between the two power sources.  Process parameters are stored in the central controller as opposed to being stored in the robot controller.  Normally the central controller memory provides several process schedules and the robot can select between them using I/O communication.  This can be advantageous because the tandem wire process is more complex and these schedules can be set up by the vendor or trained technician and can even be password protected.  It is important for the central controller to have the ability to control the wires independently with different wire feed speeds or pulsation.  It should also be able to  provide single-wire operation by turning off one of the power sources.  It is also important for the Tandem GMAW system to be able to support touch-sensing and seam-tracking capability normally required on large weldments.

The welding torch for a Tandem GMAW system is a critical component.  It needs to withstand the high heat of the twin arcs and, therefore is water-cooled.  Nozzles are specially shaped to shield both wires as well as the larger weld pools common in multi-pass welding.  Accessories like nozzle cleaners and wire cutters have been developed to service these specialty torches.  They can greatly improve productivity.

With easier availability of spare parts, and the ‘‘comfort factor’‘ of using standard, single-wire GMAW technology, many manufacturers are opting to use multiple robots versus the Tandem GMAW process.  However, in the right application, for long, heavy-deposition welds, Tandem GMAW might be the best solution.