What's New with Robots in Pharmacies and Laboratories?

Robotics have become an element of mainstream production in heavy industry for decades, but flexible automation is rapidly becoming commonplace in laboratories and pharmacies. 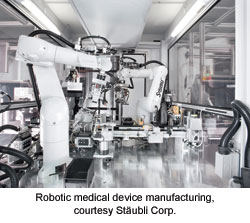 “Stäubli has seen an increase of activity in life science applications, especially in drug discovery. We have sold over 150 robots for laboratory automation in the past five years. Drug discovery is one of our most important markets and this segment will increase,” asserts Sylvie Algarra, Life Science Activity Manager at Stäubli Corp., Duncan, South Carolina. 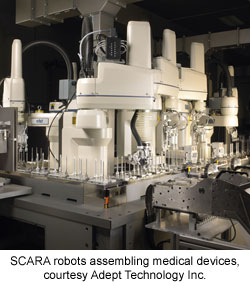 In hospitals, robotic pharmacies are a growing trend, contends Algarra of Stäubli. “A robot is at the heart of a system that mixes bulk drugs in combinations for a specific patient. Hospitals purchase drugs in bulk because it is much less expensive than buying them pre-mixed.” Algarra adds that many of the medications the system handles are for treating cancer and can be highly toxic combinations for chemotherapy. “Robots take people away from exposure to these chemicals as they are prepared for a specific patient.”

The system Algarra describes was developed by Intelligent Hospital Systems (Winnipeg, Manitoba, Canada). The system (http://www.intelligenthospitals.com/RivaSystem/index.html) can verify dose mass by way of reading a bar code and is capable of preparing over 500 patient-specific doses over the course of an eight-hour shift with a single operator.

One example is a robotic pharmaceutical dispensing application designed by Motoman Inc., (West Car-rollton, Ohio) in conjunction with McKesson HBOC (San Francisco, California). The robotic pharma-ceutical dispensing system (http://www.mckesson.com/en_us/McKesson.com/For%2BPharmacies/Retail%2BNational%2BChains/Pharmacy%2BAutomation/Pharmacy%2BAutomation.html) has an off-the-shelf robot at its heart. Us-ing a touch-screen interface, a pharmacist inputs the medication and quantity to be dispensed. The robot visits a number of trays located within the cell and picks the proper quantity of medication. A pharmacist can enter the data while attending to other tasks while the robot fills the order. Robotic pharmacies helps boost the public's understanding of robotics as well as the pharmacist's ability to fill prescriptions.

The automation pharmacy solutions system can fill up to four prescriptions per minute and is contained within a 10-by-10-foot area. As each prescription is filled, the medication selection, counting and labe-ling are checked by a bar code. Within two hours, a pharmacist can learn how to operate this system much as learning how to operate a PC.

Craig Rubenstein, Life Science Technology Leader at Motoman Inc. says, “Robotics in clinical laboratory environments are sorting test tubes, which involves moving them from one rack to another rack or from bins to racks. Robots are also processing test tubes which may mean removing caps and distributing the contents among other test tubes.” Rubenstein goes on to say robots are loading and unloading specimens into other instruments such as centrifuges, and transferring specimens from one conveyor lane to another. 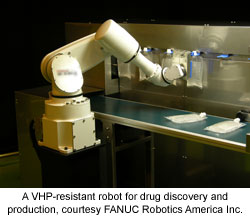 “Motoman has done a thaw and mix application, where an articulated six-axis robot removes specimens from a high speed conveyor, places them in an environmental chamber. Then, the robot removes the specimen from the chamber, mixes them, and places the specimens onto an out-bound conveyor,” Rubenstein reports. Robots are also used to manage an automated storage and retrieval system for archive of clinical specimens.

Rubenstein mentions that vision is used to ascertain which test tube needs to be handled and in what fashion. “Vision is used for recognizing the color of test tube caps as a method of sorting them. Vision may be used to determine other characteristics such as a tube’s size and cap type, scanning labels, as well as determining the volume, separation level, and the presence of clots.” Vision systems also verify that a medical device is assembled correctly or that a customized medical kit includes all necessary components prior to packaging.

Web-based mail order prescriptions is another rapidly growing trend, says Dick Motley, Distribution Network Manager at FANUC Robotics. “The Internet has unleashed many possibilities for robotics in pharmacies. Mail-order pharmacies clearly have a need for robotics due to the large volumes they handle.” 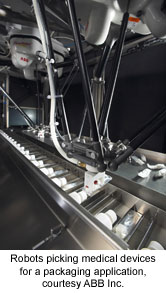 Deploying robotics is a means of complying with Food And Drug Administration (FDA) requirements to track and trace medications as they move through the production system is another important trend in pharmaceutical robotics. Robots help end-users comply with United States Pharmacopeia Chapter 797 standards on the preparation of sterile pharmaceutical compounds.

“In medical device manufacturing and pharmaceutical production, robotics have been adopted to meet FDA track and trace requirements in a certified process. The consistency and reliability of robots in packaging medical devices or pharmaceuticals, or assembling patient-specific kits lend themselves to robotics,” says Motley.

Motley continues, saying, “Accuracy is critical in pharmacies, and the consistency of robots in dispensing prescriptions brings control to the process for patient safety. Robotics allow a pharmacist to do higher value tasks rather than routine tasks.”

ABB’s Richard Tallian says, “Robotics help meet FDA regulations requiring serialization of unit count containers like pill bottles. When pills are manufactured, a unique identifier must be put each bottle, such as a serial number. It must be traceable through the entire manufacturing and distribution processes.” Tallian sees serialization as an opportunity for implementing robotics, and decreasing manual handling. “Robotics improves the management of individual bottles in the production system.” Tallian says that robotics ensures the pharmaceutical production system is functioning properly, consistently, and reliably.

Robots for Labs
As the market for automation in laboratories has grown, the trend of providing industrial robots for those applications has grown accordingly. “In life sciences applications, much of the automation in this industry has been made specifically for that industry so the equipment was designed from a laboratory point of view. People who provide automation for laboratories are realizing that speed, volumes, and reliability need to improve,” points out, Peter Cavallo, Robot Sales Manager with DENSO Robotics (Long Beach, California). “Robot manufacturers are bringing industrial robotics into the laboratory with their speed and reliability.”

While the trend is moving toward the use of more industrial-style robots in laboratories, the change has been a process, adds Motley. “Laboratories lend themselves to robotics, but bringing traditional industrial robots into that environment has been difficult because robots do not ‘speak’ the language of chemistry or pharmacology. A key trend is that system integrators who understand the research processes now provide a user interface that works well for chemists and pharmacists.”

Motoman is picking up more business in the laboratories and pharmaceutical sector. Craig Rubenstein says, “We address the needs of the laboratory with an industrial automation approach. I believe that more laboratories are viewing their operations in this context as evidenced by engaging industrial engineers as consultants or full-time employees.” To meet the robotic needs of laboratories, suppliers are improving their offerings to achieve higher levels of robustness, improved up-time, and longer life cycles, concludes Rubenstein.

Goldenberg describes the trend towards miniaturization of robotics and other equipment used in laboratories. “I see ‘laboratories on the chip’ as a major trend, where microchips are etched with micro-channels to handle or dispense tiny amounts of bioassays.” These “labs on the chip” help lower the cost of biological research by improving conservation of expensive bioassays, Goldenberg proclaims.

The throughput of robotics in pharmaceutical and laboratory applications is impressive. “Robots
can handle over 150 bottles per minute, much more than what a person can do manually. While the main benefits are consistency and accuracy, quality rather than quantity is important,” stresses Richard Tallian.

Clean Machines
Contamination through exposure to chemicals or biological hazards is an important consideration in pharmacies and laboratories. “End-users in laboratories invest in robotics because of better quality control, increases in production without errors while decreasing the risk of contamination. Robotics decrease human exposure that could potentially contaminate the product, as well as decreasing exposure of humans to dangerous compounds, chemicals, or vaccines,” says Algarra. Many chemotherapy drugs are highly toxic and robots remove people from exposure to these chemicals as they are prepared for patients.

Rubenstein sees several types of contamination that robotics can help thwart. “One is cross contamination of one specimen with another specimen. Another concern is contamination by the handler, like someone sneezing. Robots can protect technicians from the specimen, such as spilling a specimen onto an open cut.” Appropriate use of robotics and automation in labs can significantly reduce the potential for contamination. “Robotics help address quality and safety issues, for both patients and technicians.”

Algarra’s and Rubenstein’s sentiments are shared by, Robert Rochelle, North America Sales Manager for Kawasaki Robotics (USA) Inc. (Wixom, Michigan) “A robot causes less contamination than a person in a clean suit, who can only work so many hours a day. A robot can work 24 hours a day, seven days a week.” Rochelle maintains that, “Robot manufacturers and integrators have to build markets outside of the automotive sector. We are moving out of automotive and into life science applications in a big way,” Rochelle concludes.

To keep a robot from causing cross-contamination, they need to be sanitized, often with vaporous hydrogen peroxide (VHP), a very corrosive compound. To meet the harsh effects of VHP, robots are constructed of stainless steel or have special coatings. “Pharmaceutical robots are made of stainless steel and they have fewer crevices where contaminates could accumulate. Explosion-proof robots are increasingly used for pharmaceutical applications,” says Rochelle.

“Pharmaceutical robots are made from stainless steel or coated with materials that can withstand wash-down by VHP in the decontamination process,” says Algarra. “The robot does not need to be made of stainless steel if it has a coating that withstands VHP.”